Joyce Hinnefeld Reads from Her Novel

A love story that is a "green" story, too 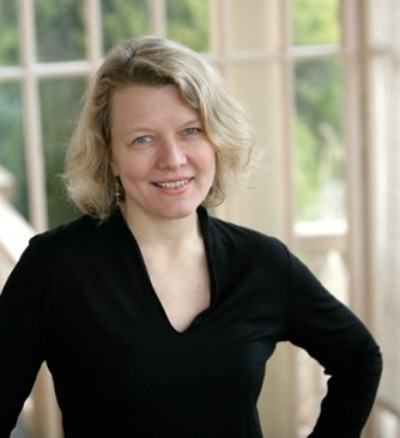 The sound "is the most stunning thing I've ever heard," said author, poet, essayist, and Moravian College professor Joyce Hinnefeld at a reading from her novel "In Hovering Flight" at Northampton Community College on April 10.  The recording she played captured the delicate, melodious warbling of a wood thrush.

At the event, she focused on the environmental angle of her book, a slant she feels is sometimes overshadowed by the novel's love story and mother-daughter relationship.

Although it explores complex human relationships, In Hovering Flight celebrates the characters' love of birds and the natural world and their concern with today's precarious ecosystem.  Hinnefeld reflects upon a wood thrush she saw in her backyard, a bird that lives a fragile existence, with nearly half of its flocks declining, as its habitats give way to development.  In the book, Addie, the mother character, who is a bird artist, claims she has seen a bird called the Cuvier's Kinglet, while her husband, a scientist, is equally certain she has not, since this bird that may exist only in the artist, John James Audubon's, imagination.

Hinnefeld talked about her characters, especially the mother character, Addie, and her artistic evolution from John James Audubon-type painting to a more didactic style informed by her anger over species' displacement.  She read passages from "In Hovering Flight," including one, an evocative word-picture describing daughter Scarlet's reverie about her childhood, filled with natural beauty.  Hinnefeld's readings summoned sound, vision and texture throughout.

An English-style tea, complete with quartered cucumber sandwiches, accompanied the reading.  The event was a part of NCC's 2017-2018 humanities series "Birds and the Human Spirit" and also of NCC's 50th anniversary celebration.