Spring commencement is May 23 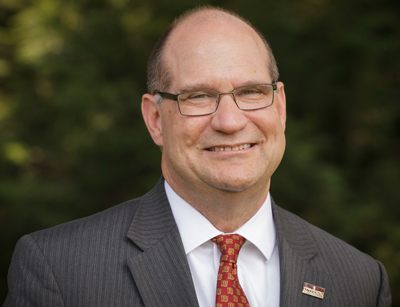 Under his leadership, KU has established 53 initiatives focusing on areas such as academic excellence, enrollment management and student success, and expanding educational opportunity and access.

Accomplishments since his arrival include the completion of a new strategic plan for the university, a new marketing plan or “branding” of the university, an increase in academic standards and an increase in the academic profile of its students, the establishment of numerous advisory committees to enhance his commitment to shared governance, and a significant increase in fundraising. Hawkinson’s community outreach efforts have included the establishment of “Walks with Wynnie,” weekly campus walks featuring the Hawkinsons’ family dog.

Hawkinson was in the U.S. Army for three years. After serving in the Illinois National Guard as a field artillery officer and executive officer for a field artillery battery, he was called to active duty as an infantry officer. He served in Germany as a platoon leader and a weapons platoon leader, and as a public affairs officer. He also served for two years as a volunteer in the Peace Corps in Mali, West Africa. As a Fulbright Scholar from 1990-91, he taught American studies at the University of Ouagadougou, Burkina Faso, West Africa, and conducted research in African folklore and oral tradition.

A native of Carpentersville, Ill., Hawkinson is married to the former Ann Marie Hayes.  His son, Jivan Deglise-Favre-Hawkinson, recently completed his doctoral studies in engineering at the University of Michigan.

Kutztown University is one of the top transfer schools for NCC students. KU and NCC have several transfer and articulation agreements in place that help Northampton students transfer credits seamlessly to Kutztown.