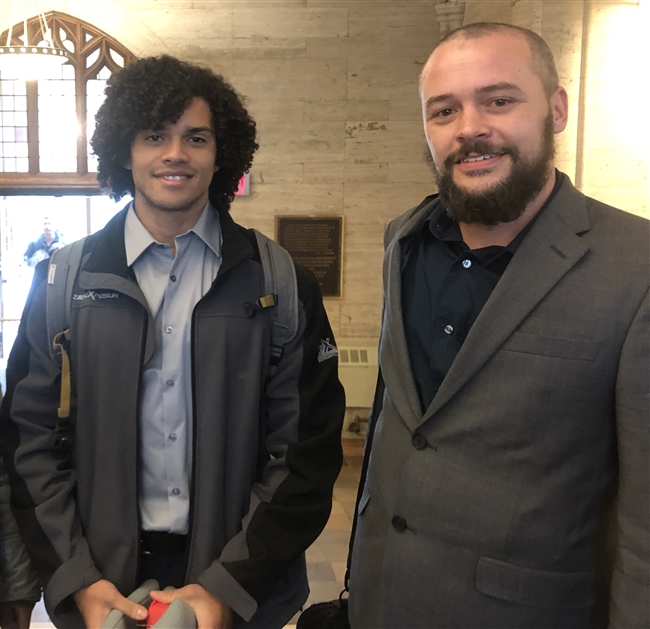 Two NCC alumni will be presenting their capstone project at Lehigh’s Annual University Expo held. Corey Trumbower ’17, and Karl Calden ’16, met at their Lehigh orientation when they were grouped in with other transfer students. Although they were both NCC students, their paths didn’t cross until they transferred.

The Expo, in its 22nd year, displays projects and products designed by Lehigh students for faculty, staff, students and community members to discover.

“It’s going to be an amazing experience,” says Calden.

After having labs together in their electrical engineering major, the two decided to pursue a capstone project together for their Senior Design Lab. They were tasked with coming up with a concept for an invention or product that encompassed what they had learned in their studies to that point. Knowing they had a $500 budget to use on research, parts and services, Calden and Trumbower proposed their idea and made sure it was financially and legally sound, conducting a patent search to see if anything like it existed on the market. The duo did a market analysis to see if there was a need for the product, who their demographics would be and how much people would be willing to pay.

Once they did the research, the idea came to life. The invention is RunRight Posture Monitoring System. The posture monitoring device, which goes around a person’s waist, will sync up to an app and tell the person if they are slouching forward or leaning too far back.

“This is particularly helpful when exercising and doing things like dead lifts,” says Calden.

Using different colored LEDs and a camera, the two men were able to see where the colors overlapped and separated, showing posture differentiation from that person’s normal form.

Calden is in the Honor Society at Lehigh University, Tau Beta Pi, and Trumbower comes from the Honors Program at NCC. Both students are ambitious and ready to present at the April 6 Expo.

“It’s a big honor that our professor thought we’d be good candidates for this. It’s great practice to pitch a design idea before we go out into the field,” Trumbower mentions.