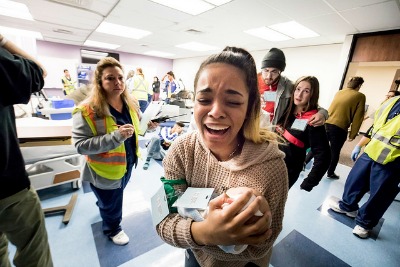 It happened so fast!  A loud blast.  Screams.  Twenty-five people wounded, some fallen on the ground.  A woman with a baby in her arms, pleading for help.  Confusion, cacophony and momentary darkness.  In other words, a mass casualty situation.

Fortunately, it was only a simulation.  And a great learning opportunity for both nursing and theatre students.

On March 28, these students and their instructors got together for a mutually beneficial exercise.  Drama students portrayed victims, and nursing students practiced triage skills, determining who needed what level of care, from vital signs printed on a card worn by each actor.  Triaging is a first step consisting of rating pulse, respiration and mental status.  Based on these vital signs, the nursing students had to assign one of four categories to each victim: in need of immediate care (red), care can be delayed (yellow), those wounded with minor injuries and (green), the deceased (black). The goal of this type of triage is to rapidly assess a large number as quickly as possible- the expectation is that a decision can be made in about 30 seconds.

Deaf actor, Lauren Bushey, could only communicate through gestures.  Unaware at first of her hearing impairment, the nursing students had to detect her deafness on their own, just as in a real situation.

"We had to make assessments immediately," said John Griffith.  "It was fun to deal with this challenge."

"It was hectic but rewarding," said Kimber Rohner.

It was nerve-wracking, but the responses came naturally after a while.  The scenarios were realistic," said Nausheema Rahim.

Actor Jaedon Muhl, who played a green-tagged person, said that participating was interesting, but that it shook up his mindset. 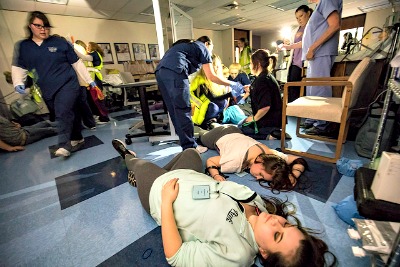 Mali Bartges, professor of nursing, held a debriefing session for nursing students and actor Muhl after the exercises.  Bartges and the students discussed personal reactions, compared and contrasted teacher and student triage assignments, and reviewed how to interact with victims in each category.  How, for example, does a first-responding nurse communicate with the family member of fatally wounded person or reassure a person with a minor injury?  It is all difficult, and assessment must be done swiftly, but each scenario has a structured thought process and procedure.

Students described their feelings about lacking sufficient resources at the moment and wanting to do everything for every patient when waiting for an ambulance presented an only resort.

"You'll come across all kinds of situations," Bartges said.  "You have to be open to variances in populations, and be careful to not make assumptions."

Overall, the simulation gave nursing and drama students a wonderful opportunity. To see more photos of the drill, check out this album.