Royalty in the Skies Over NCC 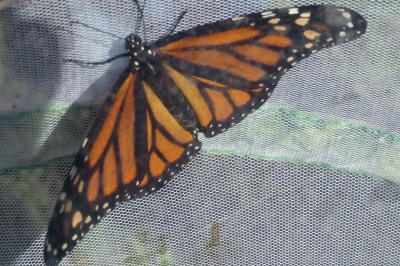 Some people plant gardens to attract butterflies, especially the regal species known as the monarch. But this semester, students in Karen M. Klein's BIOS 206 (General Ecology) class at NCC have been "growing" their own monarch butterflies -- from caterpillar through chrysalis and ultimately to the colorful beauties that grace the gardens of North America.

The NCC project is part of Monarch Watch, a nationwide effort by the University of Kansas to mitigate a drastic decline in monarchs due to habitat loss in Mexico, where they overwinter, and loss of their sole larval food source, milkweed, from herbicide application.

Students began with about 30 caterpillars, but only about half of those made it to form chrysalises, and still fewer hatched into adult butterflies. "The butterflies are notoriously difficult to raise," Klein admits.

On October 6, the students' work took flight, as they tagged and released six of the butterflies in the East 40 Community Garden at NCC's Bethlehem Campus. Appreciative kindergarteners from Reibman Childcare Center cheered them on.

"The stickers [attached harmlessly to the butterflies' hindwings] enable researchers to track the butterflies and determine their migration patterns," Klein says. Once released, the butterflies -- two males and four females -- will fly up to 50 miles a day to reach their winter habitat in Mexico.

Most of the tagged monarchs recovered in the U.S. and Canada are found by people who know nothing about the Monarch Watch project. The tags have an email address and 800 number where location information can be left. Distance flown is calculated using latitude and longitude from the release point to the capture point.

The majority of the recovered tags are obtained in Mexico, where Klein says Monarch Watch researchers pay farmers in Mexico up to $5 per butterfly recovered as part of the project.

The students hope that their butterflies will be recovered, and their migratory information added to the Monarch Watch data.

The Project and more information can be found here. www.monarchwatch.org. 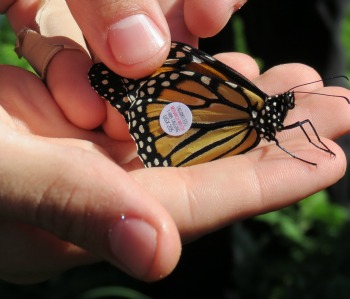 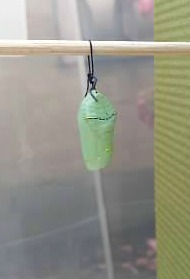