More Powerful than You Know

How powerful are the media in forming the images we have of ourselves in relation to others? 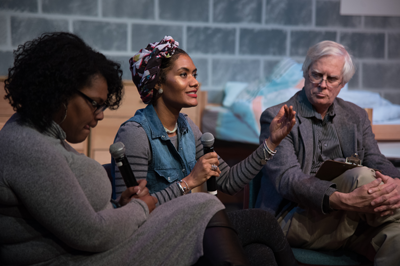 Imaani El-Burki, professor of practice in Lehigh University's Department of Journalism and Communication and faculty member of the university's Africana Studies Program explored this question at a highly interactive talk at Northampton Community College (NCC) on February 16.  The event was a part of the College's celebration of Black History Month.

A media scholar, El-Burki earned a Ph.D. in communication, culture and media from Drexel University.  She examines media, now all-pervasive because of the Internet, as a social tool, sending messages of who people "are" in society.

"Media rationalizes and validates social and political inequality" she said.  As an example, she referenced pre-Civil War posters calling for the capture and return of escaped slaves.  "These advertisements showed what it meant to be black in society," adding that present-day media still shapes our conscious and unconscious perceptions.  She indicated the "Pine-Sol Lady," a heavy-set black woman demonstrating her cleaning ability while wielding a bottle of the detergent in a commercial for the product.  Audience members brought up their own encounters with stereotypical advertising; some ads like ones for a furniture rental company, disproportionally depict black families as clients.

Another cultural trope, said El-Burki, ostensibly shows racial harmony.  And yet, on the reality show The Real World, "diversity" is a formula, featuring a black man, two "alpha" white men, two white women (one of whom is personally troubled) and an Asian or multiracial woman.  The black man is usually the subject of "house meetings" about his behavior.  "This show looks like inclusion," El-Burki says, "but everyone on it occupies a racial position in society.  This representation does not upset the status quo."

Even store merchandise sends messages about who is deemed important.  Women's hosiery is often offered in variations of beige, as if these are the default skin colors.

Throughout media, El-Burki said, authority figures are seen as white men.  In contrast, men of color are portrayed as social threats.  The "blaxploitation" movies of the 1970s furthered this public image, which persists today.  "The media is a marketing machine for the prison/industrial complex," she said.  Viewers take scenes of black men in handcuffs for granted, she said.

El-Burki also discussed the lack of variety in media representation.  While whites appear in a plethora of roles, actors of color face type-casting.

So what advice did El-Burki give students?  She recommended becoming an active media consumer.  "Turn off shows or programs that are psychologically uncomfortable or display stereotypes.  Make decisions about what you will view.  Be informed, do research," she said.  "Don't engage in racist memes."   While not optimistic about the near future, El-Burki is hopeful about the next few decades, when changes in demographics and social norms will bring people of different ethnicities closer together, diminishing prejudices.