What Goes Around Comes Around

On April 1, 2015, Northampton Community College (NCC) students, staff and faculty participated in the first official NCC Day of Service. The event was organized by the College's new Center for Civic and Community Engagement. 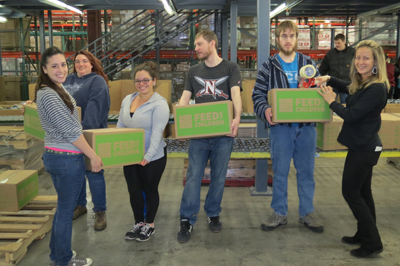 Participants could choose to volunteer with one of about thirty groups in the Lehigh Valley and Monroe County, including the Children's Home of Easton, Gress Mountain Ranch, Country Meadows, VALOR, Feed the Children, Salvation Army, Center for Animal Health and Welfare, and the Boys and Girls Club of Bethlehem and Easton.

The reasons students had for volunteering were as varied as the places they had to choose from.

"I dealt with hunger years ago when my children were younger," Kristin Shehn, psychology major, said as she helped pack boxes of non-perishable food at the Feed the Children distribution center. "They were given boxes like these when they were in school."

She paused for a moment as her eyes filled with tears. "I'm emotional talking about this. It's amazing to have been struggling with hunger and now be able to give back. What goes around comes around."

Helena Chernyak, a social work major, decided to volunteer at Feed the Children because, "I love to help kids." 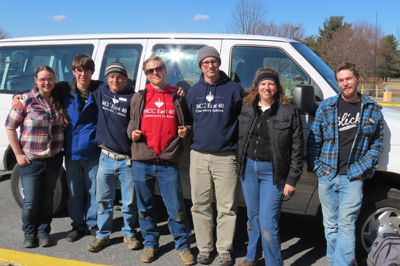 Joseph Kichline, a general studies major, chose to do spring clean-up on the grounds of Burnside Plantation. "I work as a groundskeeper, so I have no problem doing this," he said with a smile as he raked leaves on the sunny day.

Others decided to take something they were passionate about and share it for the good of others. Members of NCC's Good Growers Club spent the day at Cheston and Forks Township elementary schools, helping the students with their community gardens. They showed the children how to plant a variety of seeds, how to prepare the soil, and had them plant tomato and pepper seeds in container pots. The volunteers were impressed with how enthusiastic and attentive the children were.

"They were genuinely interested, engaged and excited," Gary Warren, the NCC East 40 Community Garden manager, enthused. "It was not just about dropping seeds into holes. The kids were excited about growing food."

"It's been a great opportunity to serve the community," Michelle Rose, a nursing student, shared. She was part of a group that prepared and served breakfast at the Salvation Army in East Stroudsburg. 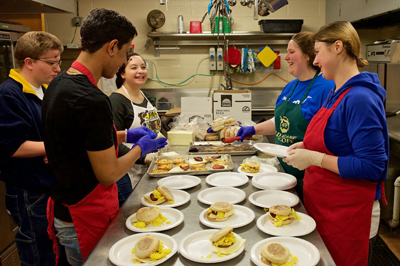 Sarah Long, a liberal arts major, got this piece of advice from her mom before she volunteered at the Salvation Army:  "Feed them well. It might be their only meal of the day." Long took it to heart, loading up plates and making sure no one left hungry. "It was fun, a good morning. I want to keep going with this. I'll put in more hours when I can."

A group of international students were helped out by NCC President Dr. Erickson as they volunteered at the Boys and Girls Club of Easton.

"It was a great collaboration," Dean Young, executive director of the Boys and Girls Club said.

"Given that this was our first event and we had no idea what the turnout would be, we're very pleased. Our students, faculty and staff were phenomenal," Debra Bohr, director of the Center for Civic and Community Engagement, said. "I'm so happy our students were so well-represented in the Lehigh Valley and Monroe County area. It worked out great for everybody." 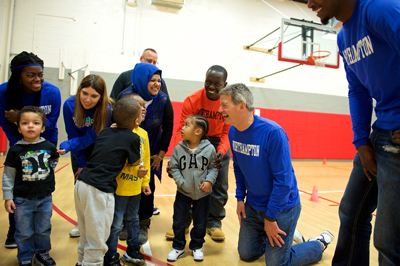 A true win-win! View more photos from NCC's Day of Service in this gallery.

If you missed NCC's Day of Service but would like to volunteer, contact  Deb Bohr in College Center, Room 236 of the Bethlehem Campus, dbohr@northampton.edu, or 610-861-5061.