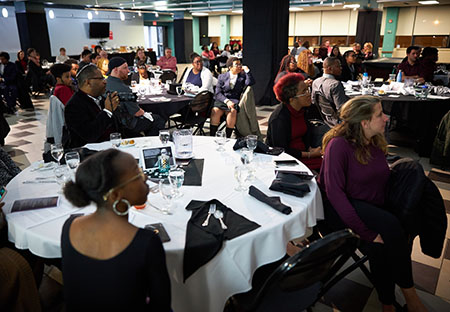 Guests filled the Student Life Zone at Northampton Community College (NCC) to capacity for the “I Have a Dream Banquet,” honoring Dr. Martin Luther King, Jr. and celebrating Black History Month on February 7.

Chief Diversity Officer Scott Blair opened the event by noting that the ground the College stands on was once home to the Leni-Lenape Indians.  In a video, President Mark Erikson picked up the thread of diversity by remarking that King’s work inspires the work of many at the College and that the NCC is committed to accepting and celebrating every student for who they are.  (Dr. Erikson was unable to attend because of his participation at a conference.)

Psychology Professor Gina Turner, Chair of the Pan African Caucus and a member of the NCC Diversity Committee, talked about the collaboration between the caucus and committee, most importantly, in hiring the College’s first chief diversity officer.

Business Professor Karen Britt introduced the keynote speaker, Dean of Business and Technology Denise Francois-Seeney by recalling First Lady Michelle Obama’s words: “Find people who will make you better.”  “Denise Francois-Seeney is that person for me,” Britt said. “She has integrity, grace and vision.” 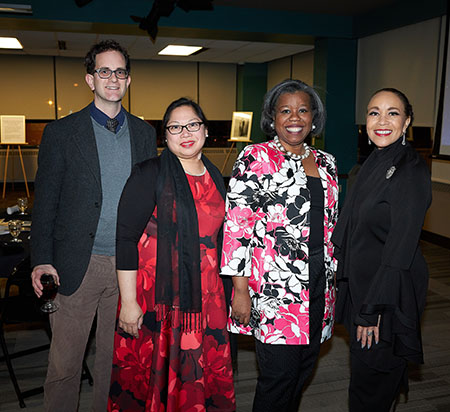 Francois-Seeney presented a complex and nuanced portrait of King, whom she feels has been transformed into a dashboard, plastic saint over the half century since his assassination.  “Go beyond the ‘feel-good narrative’, she said.  “He disrupted the status quo.”  King’s was a liberation theology, liberation from social, political and economic oppression,” she said, a proponent of radical redistribution of political and economic power.

She discussed this message of empowerment and King’s leadership of the Poor People’s Campaign, whose goal was economic and social justice.  She recalled that King “rebutted the ‘bootstrap’ theory that suggests that all hard work will be rewarded with success.”   She added that King believed that people are deluded if they think that capitalism grew out of the Protestant work ethic and sacrifice. Rather, capitalism was built on the suffering of black slaves and continues to thrive with the exploitation of the poor of all races, here and abroad.

Francois-Seeney underscored the ongoing hardships African Americans still live with: the stress and exhaustion that accompany everyday life countering discrimination, and the reversal of “everyone is innocent until proven guilty,” to “everyone is guilty until proven innocent,” when applied to people of color.  Quoting journalist Afua Hirsch, she said that “racism will follow you no matter how beautiful you are, whom you marry, what palaces you occupy, charities you support…how much money you accumulate, or what good deeds you perform it this society, racism will follow you.

Francois-Seeney addressed her audience: “I need us to develop the courage to stand up for ourselves and others.  We have arrived here in different ships, be it sea or air, but we are in the same boat now.  Until victory is won.  Don’t underestimate the power of the individual.  I need for each of us to not only take our place, but to take our place and own it.”  She spoke about the school-to-prison pipeline, food insecurity and the false belief that the poor of all races are impoverished solely because they are lazy.

She urged listeners to, as King put it, “Believe in yourself.  Move into the inner resources of your soul and declare your own emancipation.” She added, “Do not be a placeholder; be that individual who creates value because you know you are valuable.”  She encouraged her listeners to not be hopeless, because hopelessness is the enemy of justice. She said that “I believe that Dr. King would say to us ‘we are personally responsible for being more ethical than the society we grew up in.’ ”

Other quotes by King included “I refuse to accept the view that mankind is tragically bound to the starless midnight of racism and war” referring especially to King’s opposition to the War in Vietnam, a brave, controversial stand at the time.  “The function of education is to teach one to think intensively and to think critically. Intelligence plus character – that is the goal of true education.”

Foods served reflected African American culinary traditions and came with explanations of their historical significance.  Black-eyed peas, for example, were brought to America by Africans during the Middle Passage.  Baked macaroni and cheese has its roots in the rich French sauces prepared by plantation cooks in Louisiana.

The arts enriched the evening.  NCC theatre alumna and actress Peaches Gordon and student Juanita Shockley sang “Lift Every Voice and Sing,” by James Weldon Johnson and “His Eye is on the Sparrow” and read a portion of King’s “I Have a Dream” speech with passion and power.

A panel of photographs of Coretta Scott King by Art Professor Tom Shillea illustrated the woman who, alongside her husband, courageously fought for civil rights.

The banquet was presented by NCC’s Office of Diversity, Equity and Inclusion and the Pan-African Caucus. 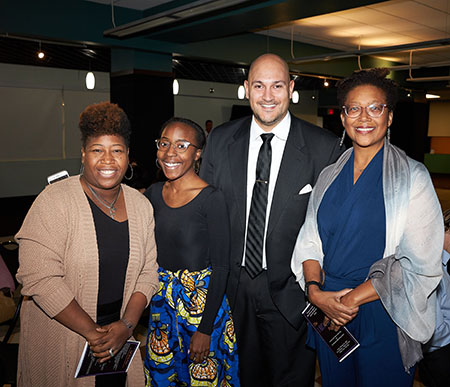