On the Road to Northampton 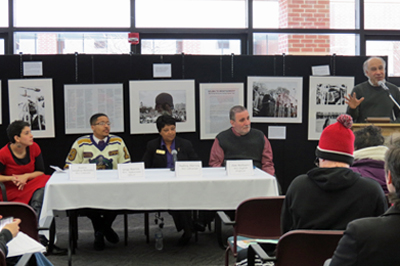 Audrey Harvey's journey began in Philadelphia. Her parents had been part of the Great Migration, moving from Georgia to pursue jobs and a better life. Harvey had a "big dream" of going to college, but didn't think it would be financially possible, until her high school English teacher helped her get a scholarship.

"I went to a small liberal arts college in Newton, Mass., where I was one of only 10 black students out of 800. I learned what my strengths were, being put in such a challenging environment at such an early age. It made me who I am," she says.

Harvey eventually earned a master's degree in library science from Drexel University, and worked as a technical librarian for corporations like Bell Labs/Lucent and Agere before coming to NCC. "I run into students all the time who remind me of myself, students with big dreams. My advice is, don't be afraid to have big dreams. One of my favorite scriptures is, 'Do not despise small beginnings.' Colllect everything you experience in your toolkit - nothing is ever wasted."

Greg Martin grew up in a military family and moved around a lot before high school. He and his brother were the only black students in their Madison, Conn., high school, and had to find a way to fit in. This served him well when he got to college at Lehigh University. "I wanted to get involved in everything. I got so involved, my grades started to suffer and I was put on academic probation. But I buckled down and realized I had to not be quite so involved."

Martin went on to become an admissions fellow at Lehigh and president of his fraternity. He credits counselor Tyrone Russell with helping him find his place at NCC, first as an advisor in the residence halls, and now as an admissions officer and cross country coach.

Tom Molinaro's road to NCC took the longest. He got a job with AT&T/New York Bell right out of high school, and soon had a wife and family to support. An avid reader, Molinaro kept a journal of the books he'd read with "mini reviews" that he wrote to keep track of them. He credits his wife with suggesting that he take some college classes and "get credit for what I was already doing."

He began with some English classes at a community college. He took only three classes at a time, the most he could handle with a full-time job. Molinaro got an associate degree, a bachelor's, and eventually, a master's degree in American literature. It was during grad school that he was asked to teach a summer course. "I've been teaching ever since," he says.

"It took me a long time. My advice is to be patient, and be persistent. And learn time management - don't leave things like studying until the last minute."

Beatriz Sanabria-Melendez grew up in Costa Rica. Although her family - a single mom, grandmother and grandfather - was poor, "they really knew the importance of education. My grandmother did everything she could to put her three children through school."

Sanabria-Melendez moved to the United States at age 12, not speaking any English. Her mother got a job in a sweatshop - "she sacrificed so much for me," she says. After high school, Sanabria-Melendez "took a class here and a class there" at LCCC and NCC, until she figured out what she wanted to do with her life.

"I wanted to leave behind something good. At my funeral, I wanted people to say 'she made a difference,' not 'she had a lot of money and cars.' So I went into social work."

Sanabria-Melendez earned her bachelor's and master's degrees and got her social work license, which she used in various jobs with Valley Youth House and for the department of health, before coming to NCC as a counselor. She urges students to be persistent, even if they can only take a class or two at a time. "That time will still go by. Give it a try even if you have doubts - don't cut yourself short."

On the Road to Northampton is sponsored by the NCC Hispanic Caucus and the International Students office.