Opiate Epidemic the Topic of Lecture

During the first half of 2015, 74 residents of Lehigh County died of opiate overdoses.  Ten percent of the American population-27 million people-struggle 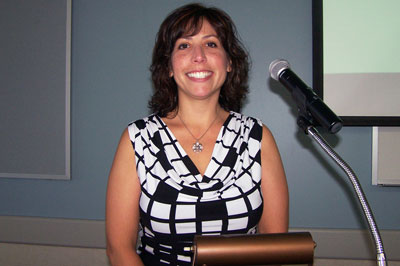 with substance abuse disorder; that is, their habitual usage interferes significantly with their daily lives, according to Staci Mulcahy, DO, addictions specialist and graduate of the Philadelphia College of Medicine.  Among young people in the Lehigh Valley, pill parties, where partyers grab handfuls of pills from a bowl, are increasing.

Mulcacy discussed the opiate epidemic that is devastating individuals and their families across the country at a lecture at Northampton Community College on September 24.

She identified two classes of opioids: heroin and prescription painkillers such as Percocet, Oxycodone and Vicodan.  While the latter are legitimately prescribed by doctors for acute and chronic pain, they are also obtained by people scouring friends' and relatives' medicine cabinets or buying them on the street.  Some users have underlying, unaddressed mental health illnesses; others begin using the drugs recreationally.

"Low perception of risk and easy access equal a recipe for disaster," Mulcahy said.  "In fact, users are risking their lives every single time."

The dangers lie in what opioids do to the brain.  They affect regions such as the frontal cortex, which regulates goal-setting, motivation and control of impulses and the limbic system, which generates craving and negative effects on withdrawal of the drug.

How can friends and relatives identify opiate abuse?  Mulcahy lists these signs:

• Needle tracks, when substances have been injected;

• Absences from school or work;

What are the symptoms of intoxication?

• Pinpoint pupils of the eye;

•Preoccupation with the drug.

The results of the drug use are staggering: loss of decision-making abilities, leading to stealing, driving under the influence and recklessness.

So, then, why can't opiate users just stop using?  Mulcahy explained that the drugs activate reward systems in the brain that are positively reinforced every time the person ingests the substance.  A cycle soon establishes itself, with tolerance setting in, so that the person needs ever-higher amounts to get the same result as before.  When the drug is withdrawn, the user experiences horrific pain.  Even when someone has been sober for a long time, stressful events can reawaken cravings, starting the cycle again.

How to break this cycle?  In Mulcahy's experience, in-hospital treatment has a high relapse rate.  Outpatient counseling seems to her to be more effective.  Twelve-step programs can be helpful but problematical since most of these groups discourage medications such as Methadone, which reduce craving.  Mulcahy says that tapering doses of withdrawal suppressants such as Soboxin allow the patient to put their lives back together while avoiding withdrawal symptoms.

One of Mulcahy's patients, identified as "Jack" followed the doctor's talk and PowerPoint/video presentation with an account of his own experience.  "No one is off the table.  Addiction can happen to anyone," he said, remembering his own first snort of cocaine, at age 17, at a party.  Around this time, he also started using Percocet, becoming addicted within three days.  Eventually, he added heroin to his pharmacopeia.  He stopped attending college, neglected personal hygiene and became a recluse.  Eleven attempts at rehab failed.  Then, he had his third and worst overdose, in which he nearly stopped breathing and almost died.  "This changed things for me," he said.

Once Jack started taking Soboxin in decreasing doses, one-and-a half years ago, he has been clean and sober.  "Life has never been better," he says.  He is back in college, with a 3.5-4.0 average and is an emergency medical technician, helping others who have overdosed.  He plans to become a doctor.

Jack, a vigorous-looking twenties-something man, said, "People who once were addicted to drugs don't look different from anyone else," he said.  "There is no one drug addiction can't reach."