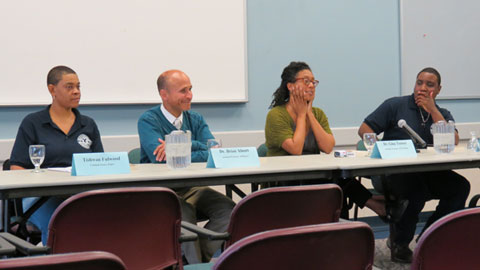 A panel of Northampton Community College professors and students met on March 17 to discuss the book, "The Good Food Revolution: Growing Healthy Food, People and Communities," authored by Will Allen. Allen is one of Time magazine's 100 Most Influential People and the keynote speaker for NCC's National Institute of the Humanities series for the academic year 2014-2015. He is nationally renowned as an urban farmer who is transforming the cultivation, production and delivery of healthful foods to under-served urban populations.

Allen promotes the belief that all people, regardless of their economic circumstances, should have access to fresh, safe, affordable, and nutritious foods at all times.  Using methods developed over a lifetime, he trains community members to become community farmers, assuring them a secure source of good food without regard to political or economic forces.

Alnutt called the book a "compelling story about a self-actualized man - he achieves the goals he sets for himself." Alnutt said Allen's thoughts about farming being the bedrock of our society really resonated with him.

As a mother, Fulwood said she agreed with the author's contention that the food we take into our bodies should be nourishing, and tries to use simple, fresh foods to feed her family whenever possible.

Illuminating "The Good Food Revolution's" ideas about eating more foods straight from one's own garden, Wright asked panelists why they think more of us don't grow gardens or eat healthier. 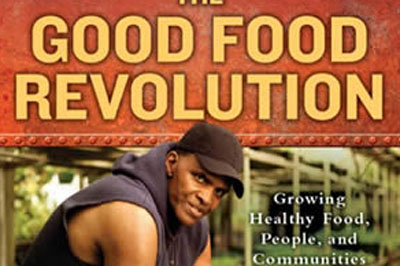 Knighton, a student-worker in NCC's food court, said he understands how convenience and time factor into healthy eating - or the lack thereof. "I see students lined up for the fast food in our food court, and I know what it's like to need to grab something when you're trying to get to class on time. You don't always have time to go for the healthier food - but it is there!"

Turner said she thinks many people have a perception that it's expensive to eat healthy. "That's can be true, but there are ways to make it less expensive. Cooking simple meals from fresh ingredients can be cheaper, but it's expensive in terms of time." She also believes consumers need much more education about what constitutes healthy choices.

Wright asked what about "The Good Food Revolution" had jumped out at the panelists as they read. Fulwood said she really related to Allen's description about his mother and her passion to feed her family well, which inspired Allen's love of gardening and wholesome food.

Alnutt said there was no single part of the book, but rather Allen's deep love of the earth. "I liked his description that a 'flow of health' comes from the earth, not just by what you eat, but actually working the earth. If you are connected to the earth, it improves your physical and psychological health as a system."

Allen will appear as NEH keynote speaker at NCC on April 22 at 7:30 p.m. at the Arthur L. Scott Spartan Center, 3535 Green Pond Road, Bethlehem Township. This is a free, public lecture; however, reservations are required.  Reserve seats online at  northampton.edu/WillAllen.

Exploration of this year's NEH theme, Agriculture and the American Identity, is made possible by an endowment for the humanities established through a grant from the National Endowment for the Humanities and generous donors.  Community Partners include the Bethlehem Area Public Library, Eastern Monroe Public Library, Bethlehem Area School District, Stroudsburg Area School District, Historic Bethlehem Museums & Sites, and Monroe County Historical Association.