Perspectives on the "Burden" of Race

Perseverance, pride and community outreach in the Pan African community 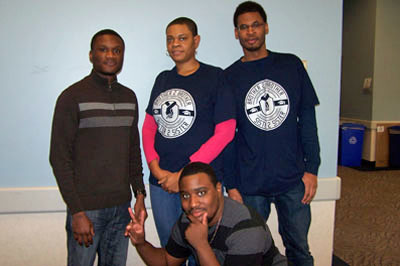 As part of Northampton Community College's (NCC) celebration of Black History Month, three members of the Brother 2 Brother Club and a member of the Sister 2 Sister Club gave their perspectives on the "burden" of race at a panel discussion on February 12.  The panelists included Billy Morris, a computer security major; Tishwan Fulwood, a criminal justice major; Jordan Knighton, a communication studies major; and Daniel Dada, a computer information services major from Nigeria.

Asked what it was like to be a Pan African/Black student at a community college in 2015, the students described NCC as a home-away-from-home, a life-changing place, an environment that opened their eyes to different cultures, and as a safe haven. "There is something special about this school," Knighton said.  Fulwood, a 35-year-old mother of two, recalled her desire to be a model for her children, but also some trepidation about entering college as an older student.  "When I got up the courage to walk through those doors, I saw people who cared about me.  It was the best decision I ever made," she said.

For Fulwood, the burden is not being seen as an individual.  "People don't see us as who we are," Fulwood said.  "I am who I say I am."

Dada remembered being told to leave his bag by the door when he entered a convenience store.  When he returned a few days later, he noticed a new sign instructing shoppers to leave their bags at the door.  "Race is an idea people use to create disparity," he said. "Eventually people internalize the notion that they are not good enough and pass that notion down through the generations."  This is a linkage he is determined to interrupt.

Morris thinks that their environment can be a burden to young black men. In many places, the prediction told to black youths is that they will go to jail or die young.  He countered this premise.  "One is not destined to fail because of their environment.  We must continue to have hope and reach out to people in tougher environments.  Try to uplift people."

The students' remarks reminded Gavin-Levy of ideas black artists held during the Harlem Renaissance of the first quarter of the 20th century, ideas such as uplift and self-identification. "You are carrying forward the ideas, goals and beliefs of generations ago," she told the panelists.

When asked about the ways black people are portrayed in the media, the students agree that viewers need to see beyond the superficial images of rappers, some of whom have never actually experienced the lives they depict, and the expensive jewelry and cars flaunted by celebrities. "You are who you are," Fullwood said.  "Don't follow these people onto the wrong path."

"It's all just entertainment," Dada said.  "Don't structure your lives based on what isn't true."

The group discussed education.  Fulwood remembered her early school years and that her history books contradicted what her parents and grandparents told her about their lives. All participants wanted to see black history incorporated into history courses, with lesser-known as well a famous people being studied.

Other topics included the shootings and reactions to them in Ferguson and New York.  Students felt that protests are good, but that they are undermined by looting and destruction by opportunistic criminals.

Talking about the features of Pan African life the panelists are proudest of, participants mentioned sense of community, perseverance, motivation, ambition, and community service.  The Brother 2 Brother and Sister 2 Sister clubs have both engaged in community service in the Lehigh Valley.