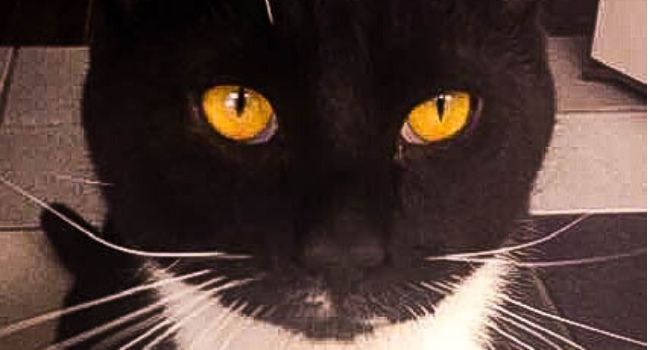 Remi behaves playfully like a dog with cat-like snobbery!

What is your pet’s name? Remington

How did you come up with this name? Remi appeared in our yard the night of the Palmerton Halloween Parade. He looked hungry, so I fed him a pork chop and brought him inside so he wouldn't get run over by the floats. He hasn't left yet. We posted signs to see if he had a home. We thought he was a she, and were calling him L'4che. On the day he went to the vet to get shots and spayed...we realized that SHE was a HE!!! So, we scrambled for a name. Our clown fish are named Smith & Wesson, so we decided to keep the theme.

How old is your pet? about a year old...under a year...we think

What is your pet’s gender? Male

What is the thing your pet cannot live without? His Pink String!

Can your pet do tricks? If so, what? Remi might have been a dog previously. He chases and fetches balls and carries them in his mouth (the little plastic ones with the bell in it...only those...no others are acceptable). He plays tug of war with a long piece of pink paracord that he dug out of a closet. He will jump to catch it, and he carries it all over the house. If he is mad at you, he will hide his string and balls in his secret hiding space in the basement. He does not like human food except tuna. He must be in the same room as humans at all time to make sure they aren't up to no good.

What is the best trick your pet has taught you? Playing tug of war with a cat is something new :-)

Do you have a nickname for your pet? Commander Poopy

You know your pet is in a good mood when he/she does this: Remi loves to play, so if he has a ball in his mouth or his beloved string, you know he is happy. He doesn't like to be held, but he loves people and wants to be where they are in the house. He gets very upset if you stand outside the door and he can't come out.

Your pet’s favorite spot to hangout is: His Command Post Tower. I've never purchased a cat house before because most cats never use them...Remi, however, sits atop and supervises the household.

One habit you would like to change: He got the name Commander Poppy because he loves his litter box...but loves to kick the poop OUT of it.

Does your pet prefer to play with people, or other animals? He loves people but doesn't like being held. He sniffs the turtle. He does not like dogs.

If you could ask your pet one question and they’d be able to answer it, what would it be? Where did you come from? He just showed up at Halloween all hungry, and I fed him a Pork Chop. He hasn't left yet.

Can your pet read your emotions? No or he doesn't care.

Funniest moment you’ve had with your pet: The first time he carried his string (it's a 10 foot paracord string) from the basement to the attic.

What is the most rewarding aspect of owning your pet? He's so funny. He really behaves playfully like a dog with cat like snobbery. We really weren't looking to add a cat to the household...we've had so many over the years, but Remi stole our hearts, and we love him!

Additional comments: Remington came to us after we posted about our turtle, Taylor. Remi and Taylor get along sensationally.

If you want to see YOUR pet in the spotlight, fill out the form and be sure to send a photo or two! 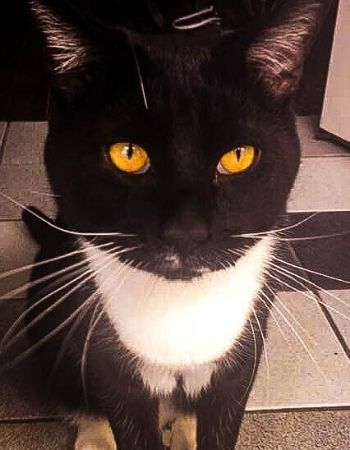