Peter Yarrow Proves the Power of a Song

Give Peace a Chance

True to his conviction that music brings people together, songwriter, performer and social justice activist Peter Yarrow had an audience of all ages singing, laughing and crying together at "Fifty Years of Giving Peace a Voice," at Lipkin Theatre on March 26. 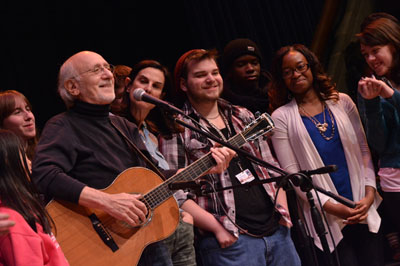 His appearance was part of Northampton Community College's (NCC) fifth annual Peace and Justice Conference, honoring the first pro-peace teach-in held at the University of Michigan on March 26, 1965, during the Vietnam War. On that same day, Yarrow and his folk song partners Paul Stookey and Mary Travers, the trio Peter, Paul and Mary, marched and sang at the Selma-to-Montgomery march for civil rights. Likewise, they lent their voices to  marches on Washington, in 1963 and 1969. They also sang at the unveiling of Andrew Goodman's tombstone. Goodman was one of three civil rights workers slain in Philadelphia, Mississippi, during Freedom Summer, 1964. Peter, Paul and Mary joined social justice causes at a time when creative artists faced strong disapproval if they took public stands. NCC Professor James Von Schilling said, "They did, giving peace a beautiful voice."

For his opening song, "Music Speaks Louder Than Words," Yarrow taught the audience the chorus:  "Music speaks louder than words. It's the only thing that the whole world listens to. When you sing, people understand." By the first repetition, Lipkin Hall resounded with voices singing along.

The audience participation illustrated Yarrow's principle that "unity is promoted by song." "It brings us together. The power of song is that it tells us that we all belong. Our hearts open up to each other," Yarrow said.

The purpose of music during the Civil Rights Movement, Yarrow said, was not entertainment. "Music formed a bond among people confirmed in their dedication to stand together in extraordinarily dangerous circumstances," he said. He recalled that freedom riders dragged off buses, beaten and jailed, sang in their cells, despite their jailors' threats.

Still an activist, Yarrow spoke about the present as well as the past. He decried the racism that pervades our society, half a century after the Civil Rights Movement. While acknowledging the substantial progress made since then, he said that racism remains endemic in our country. "We're pouring money into building jails and incarerating young black men," he said. "We're not out of the woods yet."

In some ways, injustice is growing worse, Yarrow believes. "We are at a crisis crossroads of increasing anti-semitism, Islamaphobia and prejudice against GLBT people, people of color, and anyone perceived as "different." Moreover, he looks at society today and sees greed, vulgarity, indifference, and materialism prevailing as values. Nevertheless, he is hopeful when it comes to youth. "Children do not have to follow their parents," he said. "We have to educate them in a way that is not focused on high-stakes tests. We have to educate their hearts in humanity, decency and character."

Yarrow's anti-bullying organization, Operation Respect, strives to create a compassionate, safe environment at school and at home for children. He led the audience in 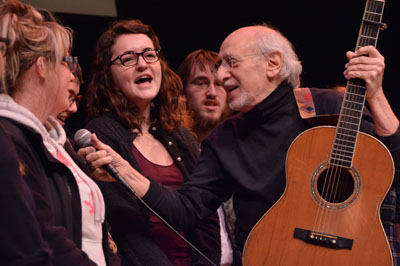 the organization's theme song, "Don't Laugh at Me," which depicted the pain of a child unchosen for a sports team, the person taunted for her weight, or the little boy called a "geek" because he wore glasses.

A visibly moved audience also sang along to John Denver's "I'm Leaving on a Jet Plane," Bob Dylan's "Blowin' in the Wind, and Pete Seeger's "If I Had a Hammer." Remarking that no one would forgive him if he left out "Puff the Magic Dragon," Yarrow invited children, whom he defined as 25 and under, to stand beside him for a rendition of the classic song. (The song, he said, is not about drugs as myth has it.) "I wrote that song fifty years ago," Yarrow said to a ten-year-old girl who joined him on stage. "Where did you learn it?" "From my mom," the girl replied, attesting to the song's transgenerational appeal and longevity.

Yarrow defined peace as not a cessation of hostilities, but rather a grassroots movement of people who have a heart. Calling moments of mutual empathy "pools of peace," he described Israeli settlers and Palestinians talking to each other about peace, as part of an endeavor by Operation Respect to bridge the groups' distrust of each other.

Yarrow's impromptu humor added levity to a basically serious talk. Early birds had the chance to follow along to a funny English nonsense ballad. "That was a sound check," Yarrow told them afterwards.

Yarrow's combination of talk, sing-along and performance was part of the Cohen Lecture Series in the Humanities, established at Northampton Community College in 1986 through the generosity of Mr. and Mrs. Bernard Cohen.

Other events in the Peace and Justice Conference included morning and afternoon workshops on "Peacebuilding Strategies to Promote Diversity:  Lessons from Ferguson." David Smith of the U.S. Institute of Peace, urged dialogue and negotiation as paths to peace. He advocated nonviolent protest and voting as effective ways to promote peaceful change. Ferguson, Missouri, he said, is a metaphor of the structural racism that affects American cities.

Smith also showed a film promoting Seeds of Peace, a summer camp in Maine that brings Israeli and Palestinian teens together to play sports on mixed teams and to get to know one another as individuals.

Community, social action and environmental groups and students presented posters in the lobby of Lipkin Theatre.

The 2015 Peace and Justice Conference was a day to be remembered by all who attended it.

See more photos from this event in the photo gallery.