The heartbeat of life resounds at NCC 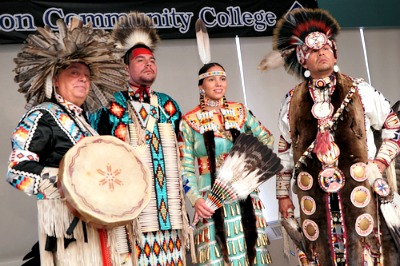 The drum is the heartbeat of life, explained the future hereditary chief of the Piscataway Indian Nation, Mark Tayac.  It also signifies collective humanity as a common characteristic of all people.  Its strong rhythms, along with jingling cones sewn onto clothing, underlay the dancing and singing of the Piscataway Indian Nation Dancers, who shared their thousands of years-long heritage with the Northampton Community College community on April 4.

In exquisite regalia, the singers and dancers connected many dances with the group's values, the most important of which is passing their traditions on and keeping them alive, from generation to generation.  Audience members were often invited to participate in the dances.

The Grand Entry Dance has evolved from a war dance to encourage bravery in hand-to-hand combat to highly organized stickball games to the sport of lacrosse.  Performers circle each other until one touches another with a feather-tufted stick.  At one time, the dance decided the winner in a dispute.  In the morning's dance at NCC, it symbolized friendship.

Another dance told the story of a hunter tracking and conquering large wild game such as moose and buffalo.  Tales are repeated exactly in their original words through generations of storytellers.

A woman's jingle dance is to summon healing.  The eagle dance honors the bird who guides one through a good life.  Like the eagle, Tayac pointed out, young people stay close to their homes as children, gradually venturing further away, until they fly off to find their own path as college students. 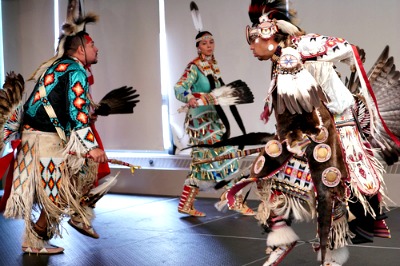 Many American Indian dances honor the animals who give people sustenance through their meat and furs.  A rabbit dance, one of few partner dances, paired dancers with audience members.  At the end of the dance, Tayac announced, "With the power invested in me, I now pronounce you....friends!"

The performance ended with a closing dance that instructs people to walk in harmony and balance with the natural world.

Check out this video of one of their dances.