Poet on a Mission

Bounding onto the stage at Lipkin Theatre, wearing a T-shirt proclaiming "On a Mission," poet and Bethlehem native, Alix Olson, brought excitement, vitality and 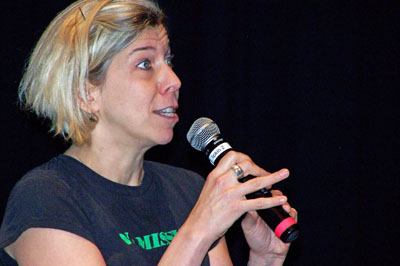 passion to her performance at Northampton Community College's Len Roberts Poetry Day on April 9.  Poetry Day is held annually in memory of Len Roberts, a beloved English professor and poet at the College, who passed away in 2007.

In his introduction, Professor of English James Von Schilling likened Olson to the late Philip Levine, a working-class poet of great charisma, who served as the United States Poet Laureate from 2011 - 2012.

Without manuscripts or notes, Olson sent forth a meteor shower of words, word play, images, and sounds-every syllable perfectly articulated.  She accompanied her language-rich verse with constant motion-her arms outstretched, her legs bending and unbending at the knee, her hands waving.

Olson's verse challenges listeners to question the status quo, be it how "progress" is defined or how we define our relationship to our country.

In one poem, she told an ironic tale of "progress," as a waylaid route to industrial conglomerates, privatization and the "quaint remains of democracy."

In "America's on Sale," she recited,

In another poem, she recalls a romantic breakup-between herself and her country.  From early love to disillusionment to anticipated abandonment, the poem follows a path.  Referring to elder neglect, Olson asks her country, as one would a human lover, "will you love me when I'm old and gray?"  The answer comes back, "As long as you don't need nothing."  Olson signed off as a "grieving citizen."

Her commentary on our country's desertion of people at times of need is expressed through a poem Olson wrote during Hurricane Katrina in which she depicts unattended victims stranded on roofs, stuck in handcuffs and waiting in wheelchairs for help that does not arrive.  She remembers a child with a poster: "Missing a mother and two brothers."

In "Dear 16 Year-Old," she uses diary form to tell her younger self that

"One day I will deposit you in a field of women with a wisdom as ancient as constellations,
They will teach you to two-step with the world you thought you had to tackle,
They might unshackle your spirit
They might ask you just what exactly it is you plan to do with this one trifling and everything life.
I wish I could pack parachutes in your pockets, guarantee a soft landing
Towards the ground
From where I'm standing
It's going to be spectacular."

Olson briefly commented on the recent murder of a fleeing, defenseless black man, Walter Scott, by a policeman in South Carolina.  She said what is needed even more than an indictment is an honest look at a society "entangled in a brutal capitalist system."

She attributed her development as a poet, in part, to growing up in Bethlehem.  "If I had grown up in some other place, my views and my poetry would not have been the same," she said.  Describing the small city she grew up in as a "very conservative place," she extolled her teachers at Liberty High School, including Len Perrett and Roger Hudak, for encouraging her to trust her own unconventional voice.  At this high school, she found a rare outlet for her creativity, the type of forum largely absent from her hometown at the time, two decades ago, before Bethlehem became more cosmopolitan.

Olson also found validation in her mother, a staunch feminist who told her to make friends with her voice.  Extolling other women who went before her and have inspired her, she chanted their names, again and again.

Her enthusiastic audience asked her many thought-provoking questions, and she answered them thoughtfully.

Olson graduated from Wesleyan University in 1997.  That year, she began performing at the Nuyorican Poets Café in Greenwich Village.  Among her spoken word CDs are Built Like That, Independence Meal, Protagonist.  She also edited the spoken word anthology Word Warriors: 35 Women Leaders in the Spoken Word Revolution.  She is now pursuing a Ph.D. in political science, with an emphasis on feminist studies, at the Massachusetts Institute of Technology.

Olson gave a performance later the same day at the Monroe Campus.