"Another springtime, another dollar.  I wonder
as I drive from one job to another
how many more hours, Honest-to-God
hours I have left, how many more Christmasses
I will buy the unnecessary gifts."

-Len Roberts, "At the Train Tracks"

Although he passed away in 2007, Northampton Community College professor and poet Len Roberts lives on in his poems and the memories of students and professors. 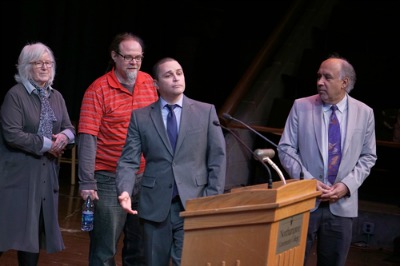 Three NCC professors remembered their esteemed colleague, who befriended them and started the College's annual Poetry Day about 43 years ago.  The 2017 Len Roberts Poetry Day also celebrated the College's fiftieth anniversary and saluted NCC faulty members who write poetry, including Elizabeth Bodien, former assistant professor of sociology; Randy Boone, professor of English; and Javier Ávila, professor of English.  Each poet read from his or her work and that of Roberts on April 6 at the Bethlehem and Monroe campuses.

Videos of three past Poetry Day participants, two of them-Lucille Clifton and Philip Levine-Pulitzer Prize and National Book Award winners, brought back memories and illustrated the exceptional artists Roberts attracted to NCC; both individuals served as poet laureates-Clifton of Maryland and Levine of the United States.  Two of their readings featured poems bearing ship names as titles, each with meaningful links to themes.  Clifton's enslaved African forebears endured the Middle Passage on slave ships with cruelly ironic appellations such as "Angel" and "Jesus."  Levine's "The Mercy" recalled his immigrant mother's arrival in New York on the ship The Mercy, when the nine-year-old immigrant learned about compassion through the juicy splash of a seaman's gift, an orange.

Roberts' "Black Top Act" described the drudgery of laying blacktop and the despair of poverty:

...the heat crawled
under his shirt
and he knew what it was like to be poor
and hot and forced
to listen to the boss...

In "Acupuncture and Cleansing at 48," Roberts concludes that,

"the body is nothing but a map of the
heart."

In "The Birches," Boone evoked his childhood, playing with matchbox-cars and other treasures under the trees of rural Pennsylvania, recollections that persist as "a chestful of memories."

Bodien's "Mala Aria" ("bad air" in Latin, referring to a long-ago attribution of the disease) recalled her near-death from malaria and the eventual inner voice that told her "stay here for now."

"Someone will discard photographs of your past..."

"And you will not be the protagonist
of your own funeral."

A video of Alix Olson captured an impassioned performance of slam poetry.

This year's Poetry Day participants recalled Roberts' dedication to his craft, his working-class roots, his rebellious streak, and his enrichment of humanity.  Ávila remembered confiding in Roberts about his struggle with writer's block:  "If you're a writer, you don't quit," Roberts told him.  Professor James Von Schilling, who introduced each poet and commented on the videos, noted the connections in life and verse Roberts shared with the poets on stage.