Program gears up at NCC 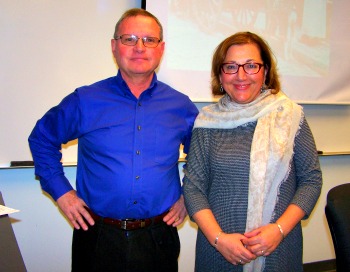 Anastasakos recalled a vivid memory from 1972, when she immigrated to the United States with her family.  "I remember a large bedroom, empty of furniture.  When I wanted to study, I'd put a blanket in a corner, an English dictionary close by."  Fortunately, the Anastasakos family had relatives already in the United States who let them live with them for a while and helped them find an apartment and furnishings.

She contrasted her arrival as an immigrant with that of refugees, who, unlike immigrants, have fled their countries in imminent danger of their lives.  They know that if they stay in their native countries they and their families will be killed.  "I can only imagine what refugees go through," she said.  "As an immigrant, I needed all these people [relatives] to help me.  Still, I did not struggle crossing seas; I came by plane.  I did not lose relatives."  Because refugees are in a position of mortal danger, they are unique and different from immigrants, who come by choice.

Anastasakos believes that NCC's Refugee Resettlement Initiative embodies "think global, act local."  "All of us have a responsibility as global and American citizens, to face the truth and act," Anastasakos said.

The decision to help refugees began with Rinehimer.  Listening to NPR (National Public Radio), he heard Dia Abdo, a former refugee and founder of the Every Campus a Refuge project, speak.  He heard Abdo describe her organization, which calls on colleges to host a refugee family among the millions escaping violence in search of a safe haven.  "NCC is the kind of place where compassion works," he thought to himself.  He received support to begin a grassroots initiative on campus.  Now, in partnership with Bethany Christian Services, NCC is working on finding housing for a refugee family or individual starting around February 1.  Rinehimer has secured five trucks to be used for moving the furniture and supplies that have been donated.

NCC is the first college in the Lehigh Valley to participate in Every Campus a Refuge.  At least one other local college has shown an interest in joining the project.

According to Sell and Barnswell, 110 single people and families resettled in the Lehigh Valley last year.  In the coming year, their agency expects 215.  Refugees helped by Bethany Christian Services in recent years have been from Syria, Eritrea, Congo, Iraq, Sudan, and Burma.  The United States accepts only one percent of the world's refugees, Sell and Barnswell said.

Who are considered refugees, and what is done to assist them?  Sell and Barnswell explained: refugees are classified as such by the United Nations.  They must have fled their countries of origin because of religious or ethnic persecution.  Members of religious and ethnic groups who face this threat as a distinct group do not have to prove their status personally.

Once refugees have come to the Lehigh Valley from an intermediate country or a camp, Bethany Christian Services meets the newcomers at the airport, settles them into housing, sees that they have health screenings and that children are enrolled in school, and helps adults find jobs, learn English and obtain documentation such as Social Security cards.  Volunteers drive people to medical appointments, collect donations of furniture and household items, and assist in numerous other ways.  Some NCC students are already helping refugees through volunteer work with Bethany Services, according to Debra Bohr, director of NCC's Center for Civic & Community Engagement.  More are expected to get involved in the spring through the NCC initiative.

If you may be able to donate supplies, click here to see what's needed.