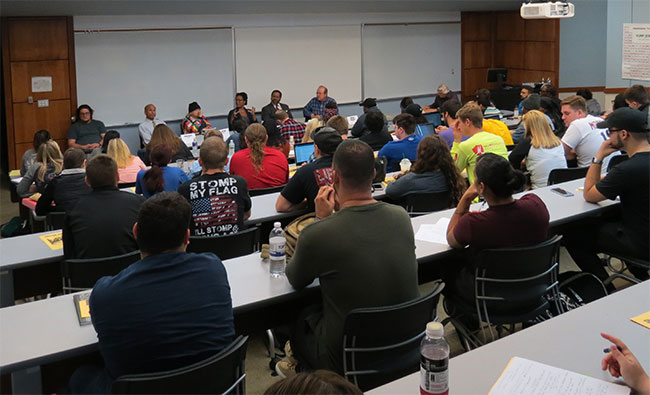 A panel discussion with Gina Turner, NCC psychology professor, and Professors of History  Sholomo Levy, Michael McGovern, Earl Page and Brian Alnutt was held at Northampton Community College's Bethlehem Campus on September 7. The topic was whether statues, flags and other symbols of our past should be removed if they are offensive to one or many.

The equestrian statue in Memphis, TN, of Nathan Bedford Forrest, general in the Confederate Army during the American Civil War and co-founder of the KKK, is an example of a statue that is currently in the center of this national debate.  Levy believes the statue should be removed, as well as other statues like this, which Turner told the room, are constant reminders of the history of racism in the country.

Alnutt made the argument that those symbols and structures are less about ideology nowadays and more about a tie to family history and bravery even if what they fought for is no longer considered a noble cause. Page spoke on where the line should be drawn. Do we have the right to impose today's moral judgment on people of the past because morals change over time? He gave an example of tattoos. Many years ago, those who had tattoos were thought of as criminals. Page pointed out that standards change quickly. What we might have today, may be torn down tomorrow.

One thing everyone seemed to agree on was that history will judge today's society on whether we take down these symbols a or leave them standing. The panelists felt that people our society places on pedestals should reflect who we are, our values, commitments, and beliefs. Page ended by saying both sides of the debate feel they are correct, but there needs to be more dialogue on this topic.