If you've ever picnicked in Central Park or hiked in Yellowstone National Park, you can thank Frederick Law Olmsted. 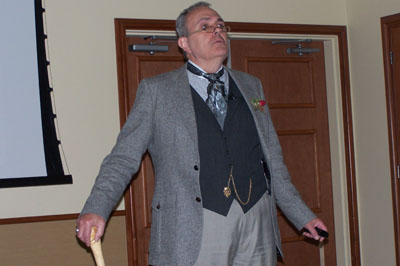 Olmsted, who lived from 1822 to 1903, took many routes to "finding himself" before landscaping 500 community parks and conserving some of our treasured national sites.

As the last lecturer in this spring's Update series of Northampton Community College, on May 13, Kirk Brown, president of the Garden Writers' Association, impersonated the charismatic Olmsted, wearing a beaver-furred top hat, boutonnière and exuberant necktie.  He carried a fashionable walking stick, which he flourished on occasion to emphasize his most emphatic points.  He portrayed Olmsted as a vigorous, even flamboyant, man of grand gestures and ideas.

Subsidized by his prosperous merchant father, the Hartford-born Olmsted tried several occupations before arriving at landscape architecture (a term he invented): surveying land, clerking for a shipping agent, working as a shipmate on a boat bound for China, publishing books, authoring best-selling travelogues, mining gold in California, and practicing scientific farming on Staten Island.  During the Civil War, Olmsted led the U.S. Sanitary Commission, making cleanliness a priority in battlefield hospitals, a radical notion in the 1860s.

He also wrote for the magazine The Horticulturist, "the first Home and Gardens," as Brown described it.  After a three-year "rambling" visit to the English countryside, Olmsted wrote and published Walks and Talks of an American Farmer in England. Appointed at age 35 as superintendent of The Central Park of New York, he remembered English parks-the first public parks in the world.  Previously parks had been private grounds, where aristocrats could hunt, stroll and display their status. Olmstead envisioned parks rather as embodiments of American democracy, where people from all walks of life could find refreshment.

Picturing a "pastoral landscape in the city," open to all, Olmsted and his fellow landscape architect Calvert Vaux, transformed a rocky, wooded stretch of Manhattan, slated to become part of Manhattan's growing street grid, into Central Park, which opened in 1873 after 18 years of labor.

In all he did, the landscape architect followed his philosophy: "I propose to seek out a 'genus loci,' a genius of place, the spirit of a place," he said. "There are three grand elements of pastoral landscape design-grass, water and woods."

In the 1870s, Olmsted originated the concept of national parks. Convincing the federal government to set undeveloped land aside, he championed the preservation of the Sierra Nevada slopes as Yosemite National Park.

Olmsted's art can still be seen at George Washington Vanderbilt's mansion "Biltmore," in North Carolina; Prospect Park, in Brooklyn; Cornell University, in Ithaca, New York; Stanford University, in California; and a multitude of other landmarks. "America's First Lawn," the 270-acre west front of the U.S. Capitol Building, was designed by Olmsted.  Buffalo, New York, has Olmsted-conceived connected parkways and Boston has the Fens, a mix of communal gardens and wild land.  For the World's Fair of 1893, Olmsted designed the Wooded Island, with its Japanese pavilion, and helped promote the fair as an expression of democracy.

He had his eyes on posterity.

"You don't know what will happen when we set out on a path," said Olmsted/Brown.  "Will we sit under shade trees?  How much democracy can we create through the interweaving of lives? Let us seek such works that our descendants will thank us for."

The Update series is a ten-week program providing opportunities for adults age 50 and over to hear visiting speakers each week. Topics are varied and include business, history, the arts, travel, the sciences, health, government, and leisure activities.

The Update series will resume in the fall.  Reservation forms will be posted in early July on www.northampton.edu/lifelearn.