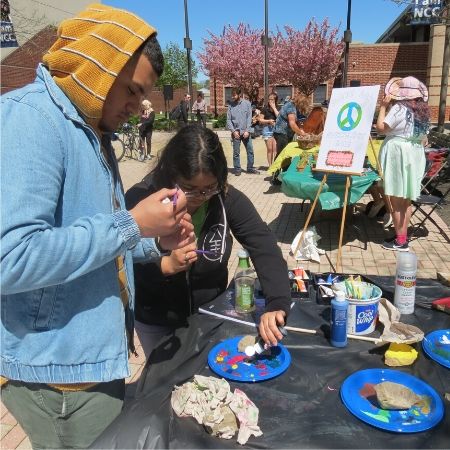 In January 1969, oil-rig workers off the California coastline couldn’t stop a leak of crude oil into the Pacific Ocean.  The leak lasted a month, polluting 800 square miles of ocean and coating 35 miles of beach with oil and sludge.  Over 3,600 seabirds and thousands more fish and marine life died from the oil that coated them.

“I am amazed at the publicity for the loss of a few birds,” said the oil company’s president when photos of the doomed seabirds, coated in black oil and stuck in the sludge, were published and broadcast. But many Americans were shocked, including U.S. Senator Gaylord Nelson, who took action.

“The youth of today face an ugly world of the near future,” Nelson told Congress, “with dangerously and deadly polluted air and water; sprawling, crowded development [and] festering mounds of debris.”

Nelson assembled a young staff in Washington, D.C., with volunteers around the country.  Many were students or recent graduates.  They chose Wednesday, April 22nd, 1970 – 50 years ago! – for a national event because it was in between Spring Break and Exam Week at most colleges.  A top NYC advertising copywriter suggested Ecology Day, Environment Day, and E Day as possible names, but he said they’d be crazy not to use his top choice: Earth Day.

Nelson’s young organizers promoted Earth Day to colleges and high schools, environmental and conservation groups, labor unions, teachers and parent associations, religious and civic groups, and the media.  They had modest plans for about 40 events around the country.  Instead, over 12,000 events happened that first Earth Day with about 20 million participants.

In Michigan, college students cleaned up the banks of the Kalamazoo and stomped on hundreds of aluminum cans, in an early example of recycling.

A sixth-grade science class in Iowa sang Woody Guthrie’s “This Land Is Your Land,” while on a field trip that included overlooking a local polluted lake. Their teacher used the song’s lyrics to promote the environmental cause, saying, “If it ‘was made for you and me,’ then I think it’s our responsibility to take care of it.”

In Minneapolis, college students at a rally gave fake “awards” to the outstanding local polluters.   Then demonstrators went to a General Electric (GE) stockholders meeting in a city auditorium and picketed and chanted outside. One of the protesters told a GE spokesman, “We have to decrease our consumption of electricity because most of our electricity is produced by the burning of fossil fuels.”   He responded, “I’m sure there’s nothing I could say to change your opinion.”

Inside Boston’s Logan Airport, a few hundred young people gathered with coffins for what they called a “die-in.”  The coffins, explained a TV reporter, “symbolize the problems of airport and airplane pollution.”  But the demonstrators were forced out of the airport by state police, who seized the coffins and arrested thirteen.

In New York City, Fifth Avenue and 14th Street around Union Square were closed so that thousands could gather for speeches and music and to simply enjoy the streets empty of vehicles.

In Albuquerque, local residents took CBS-TV reporter Bob Schieffer along on a march through the poorest neighborhoods.  Schieffer described the scene as “a neighborhood of dirt roads, outdoor plumbing, and adobe houses,” close to the city’s waste disposal facility. “On windy days,” said Schieffer, “it covers the area with a choking gas.”  The residents were led by Arturo Sandoval, one of the original Earth Day organizers hired by Senator Nelson. Sandoval told them and the CBS audience at home, "We are going to make people understand that the kind of things that cause air pollution and water pollution are the same kinds of things that cause poverty, that cause hunger in this country.”

Earth Day in Philadelphia was actually Earth Week, April 22-26, organized by a citywide committee that brought in politicians, religious groups, the Chamber of Commerce, and corporate sponsors. “We’re involved in a mass movement in the fullest sense of the word,” explained one of the young organizers, ““to get a real mass involvement of Middle America, of Labor, of business.”

“It was a gamble,” Gaylord Nelson later said about the nationwide happening, “but it worked.”  The First Earth Day had an immediate impact and also long-term effects.  One immediate result was the Environmental Protection Agency (EPA) passed by Congress that December.  Congress also passed the Occupational Health and Safety Act, the Clean Air and Clean Water Acts in 1971, and the Endangered Species Act in 1973.

The young Earth Day organizers also raised money to defeat incumbent Congressmen who’d been stalling such laws, including the powerful Chair of the House Public Works Committee, an opponent of mass transit.

Long-term, the first Earth Day raised public consciousness about pollution and air and water quality in general; toxic wastes and landfills; the loss of species, natural habitats, forests, arable land, and coral reefs; plastics and other non-degradable products; noise and light pollution; and the over-riding concerns of climate change and global warming.

Yes, the fate of Earth as a habitable planet is still in great jeopardy.  And this year’s Earth Day is muted by the restrictions of our current public health crisis.  But the planning and work of Gaylord Nelson and the young Earth Day organizers had remarkable results.  As we modify our lives this April and wonder about the future, they show us how our individual acts can encourage social actions that lead to social change. That’s worth celebrating this April 22th, on Earth Day’s 50th Birthday.