Tony Moore likes to remind his embalming students that their future clients must always look not only peaceful but natural. The last image the living have of the dead is often from the casket, says NCC's director of funeral service education, and that picture needs to be positive to last positively. The goal is to make the deceased seem almost alive; the trick is to put on a subtle show. 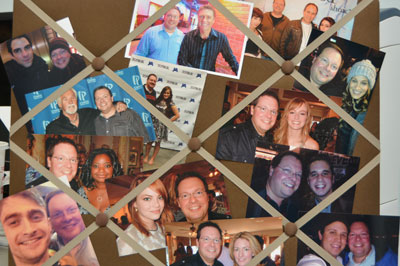 Moore sure knows how to put on a show. As a funeral home director, he embalmed his father so well, his mother thought her late husband was sleeping. As a church music director, he produced a 200-person Easter extravaganza. As a theatrical music director, he conducted musicals ranging from "Mame" to "Assassins." Last fall he made his NCC stage debut as a keyboardist for "Rent," the award-winning hit about struggling artists bonding in '80s Manhattan.

Moore is telling his zigzagging story in his Commonwealth Hall office, which has a miniature casket and snapshots of celebrities-Sarah Jessica Parker, Daniel Radcliffe-he met after seeing their Broadway plays. He grew up in the tiny town of Coffeeville, Miss., the child of a teacher's assistant and a leader at a factory that made air-conditioner parts. He began practicing piano at age 4; at 7 he fell under the spell of his first musical, "The Sound of Music." In high school he played trombone in the marching band and conducted the concert band. He also learned to tune a piano with his maternal grandfather, a musical preacher.

It was his grandfather's funeral that guided Moore into the funeral business. A teen at the time, he admired the casket springs that made his grandfather look remarkably comfortable. He didn't admire the dirt the embalmer left under the fingernails of his grandfather, who died while gardening. Moore vowed that when he became an embalmer, his clients would always be spotless.

Moore was in his college when he began working, and living, at a funeral home. He got the job after a prankster friend called the first funeral home in the Jackson, Miss., phone book and pretended he was Moore. Over the next two decades Moore juggled four careers. He worked part-time in funeral homes while earning master's degrees in conducting and education, shepherding musicals for children ("The Wizard of Oz") and adults ("Spring Awakening"), and directing music for churches, some of which employed him as a mortician. 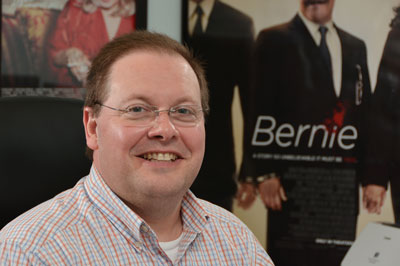 Moore entered mortuary school in 2005, the last year for "Six Feet Under," the popular TV series set in a troubled family funeral home. Six years later he found himself being compared to the title character in the movie "Bernie," inspired by the true tale of a very popular, very theatrical Texas mortician imprisoned for murdering his elderly, wealthy, crotchety patroness. Moore is quite fond of the film; in fact, a poster featuring star Jack Black hangs in his office.

Over a quarter century Moore has watched the funeral industry become simpler and showier. Many more families chose cremation over standard burial to reduce financial and emotional expenses; many more families turn memorial services into personalized spectacles. Moore has participated in events where a casket was draped with a dead equestrian's saddle and a parlor was decorated with a trail of a deceased artist's works. His most common request as a performer is "Sweet Beulah Land"; he estimates he's sung the Southern ode to crossing over at least 50 times.

Moore came to NCC in 2013, hoping to put a distinctive stamp on one of the country's 57 mortuary schools. He has helped change the program significantly, adding  prerequisites, higher minimum grades and a review process for the national board exam. He continues to teach embalming as an act of care and kindness, reminding students to treat strangers as relations.

Settled up North for the first time, Moore remains a triple threat. He directs music at a church in suburban Easton. This summer he served as music director for a Pennsylvania Playhouse production of "The Full Monty," where unemployed steel workers regain their self-esteem by staging a stripping show. He enjoyed working with director Bill Mutimer, NCC's director of theatre. He especially enjoyed helping actors hit notes they never dreamed of hitting.

Moore has taken advantage of Bethlehem's close proximity to Manhattan, America's theater capital. He's seen nearly 30 performances on and off Broadway, including six of the musical "Hedwig and the Angry Inch." One of the Hedwigs was Michael C. Hall, who starred in "Six Feet Under."

Moore plans to attend "Fun Home," the Tony Award-winning musical based on a graphic memoir by the lesbian daughter of a funeral home director who killed himself after revealing he was gay. He hopes that one day he'll perform the show at NCC, where he's the resident musical mortician.