The Power of Words

"I know nothing in the world that has as much power as a word. Sometimes I write one, and I look at it, until it begins to shine," poet Emily Dickinson once said.  Words held the spotlight at Northampton Community College's (NCC) speech competition on November 19.

All associate degree candidates at NCC take a speech communication course as a foundation of their educational core.  At any given time, more than 1,000 students are enrolled in one of fifty sections.  Out of these students, forty are nominated by their professors or their class to compete in the speech contest, held once every semester.  The field is further narrowed down to five or six top-scoring contestants.

Adriane Schaffer took Stress as her topic, showing how chronic stress adversely affects health, from headaches and fatigue to skin disorders and hair 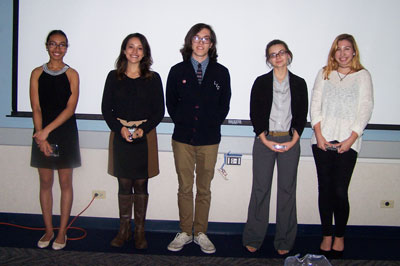 loss.  At its worst, chronic stress can contribute to obesity and heart disease.  "It is the body's reaction to the demands of the world," she said.  Schaffer suggested measures to counter stress:  keep a positive and realistic outlook, practice relaxation activities such as yoga, exercise, say no to overwhelming requests, get enough rest, and spend time with people one loves.

Noah Reichard described how music enhances life in Music: the Brain's Favorite Drug.  He demonstrated how music, by stimulating various parts of the brain, strengthens cognitive skills such as creativity, reasoning and language.  He cited research showing that cardiac surgery patients exposed to music experienced less pain and anxiety than those treated without music.  Alzheimer's patients, he pointed out, can perform music after other abilities have gone, because music energizes many areas of the brain.

Sapphire Salandy in Steel Drums demonstrated the sound of this melodic percussive instrument by playing two well-known tunes on one.  She traced the steel drum's history, starting in Trinidad and Tobago and described six distinctive types.  With a steel drum, she showed how the instrument is played with two drumsticks encased in rubber tubing at one end.

Hailey Carson discussed Suicide.  She quoted research showing that suicide has increased; one person takes his or her own life every 13 minutes, making suicide the tenth leading cause of death in the United States.  Suicidal risk, she said, can be recognized by a person's talking about taking their life, expressing feelings of having no reason to live, self-isolation, and drug or alcohol use.  She emphasized that help is available to people with suicidal thoughts: a suicide prevention phone line, 1-800-273-TALK; urgent care centers and hospital emergency rooms; and understanding, treatment and education relating to mental illness.  Asking her listeners to put their hands over their hearts, she concluded with "You are alive for a reason.  Never give up."

Kateland Ackerman's  Water & What it Does for the Body detailed the ways water is essential for life. Water enables the body to function, it dissolves minerals, lubricates joints.  Deprived of water, people die faster than from the lack of any other nutrient.  Water is lost through sweating, crying, digestive disorders, and alcohol use.  Twenty-five percent of water comes from food such as fruits and vegetables.  Warm water consumed in the morning assists the digestive system and decreases the chance of a heart attack, she told the audience.

Ariel Frey unable to participate in the speech contest that evening, was nonetheless recognized for her work on The Mind of a Psychopath.

The judges based their decisions on a number of qualities.  Molchany commented that all participants are already winners for having placed high among 1,000 students on speech communications classes and by dint of their hard work, which included a great deal of research.