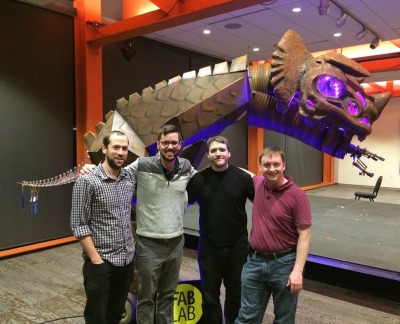 Tobor the Robot, in its current guise as the Fabasaur, recently returned from an exciting and award-winning trip to the 2017 World Maker Faire in San Francisco's Bay Area!

Held May 19-21, the Faire is the largest festival in the world that celebrates inventors and inventions. The Fab Lab's 14-foot custom-built robotic dinosaur won an impressive six Editor's Choice ribbons, as well as being named Best Exhibit by PC Magazine.

Tobor the Great started life in 2015 as a bare-bones metal robot. It was created by 14 NCC Fab Lab staff members who conceived, engineered and manufactured all the robot's parts as a showcase of their talents and the Fab Lab's cutting-edge technology. Tobor was capable of locomotion and of picking things up by remote control. It  went to a few maker faires in the bare-bones state, but failed to score any ribbons or awards.

Determined to do better, the Fab Lab team sprang into action and came up with the idea to transform Tobor into a walking, "talking" dinosaur. The Fabasaur is the result of a true team effort, combining different skills such as electronics, woodworking, machining, audio, and 3D printing.

Carving instructor Dave Deon began to visualize and draw the dinosaur head he would eventually carve. Lisa Glover, laser instructor, simulated a dino body made of lasered parts that would move fluidly with the actuators that raise and lower the two main sections of the robot. Sean Kernen created solidworks drawings for a whole new three-fingered gripper that would come out of the dinosaur's mouth. Jeff Boerner visualized a flexible tail that would move with the robot. Bob Blum, Ken Burton, Michael Bianco, Michael Brolly, and Derek Richline decided to rehabilitate a used electric-wheel chair and build a movable powered base in the form of a rusted car. Anthony Lucrezi started work on new MP3 sound files to make TOBOR react to different positions with unique sounds. He also began an LED lighting program for the head and the car. Tim Dodge reconfigured a whole new control glove with new WIFI systems for controlling many more components at the same time than TOBOR could. Lastly, Brian Feldman, whose work on the electronics made Tobor actually function, redesigned all the circuit boards and the code -- the robot's brain. 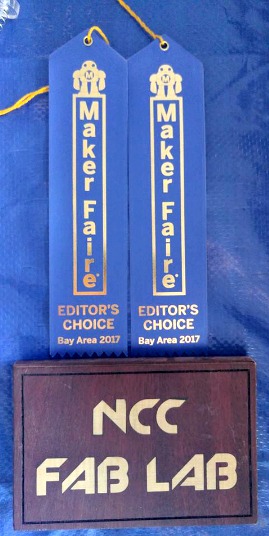 The Fabasaur's debut at the World Maker Faire held in New York last October garnered six ribbons and a Best Exhibit awards there, before moving on to the San Francisco Faire in May.

The Fab Lab isn't only for NCC staff and students. It's open to the community, so come unleash your imagination. Anything is possible! Visit Tobor at the new Museum of Industrial History, located adjacent to the Fowler Family Southside Center.