What Your Dogs Know about You and Other Things

Our most popular pets, dogs, have remarkable powers of intuition. 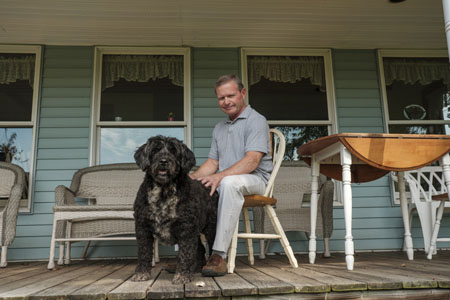 Have you wondered why your dog runs to the door and whines even before your car key is out of the lock, but barks at strange cars?  And, have you noticed that your dog seems to anticipate, to the hour, when you are coming home from school or work?

In his presentation, “How Dogs Work: Senses and Perception,” on February 7, Dr. Charles Rinehimer, professor of biology at Northampton Community College (NCC) and a veterinarian, captivated a large audience with fascinating facts about our most popular pets’ remarkable powers of intuition.

“People anthromorphize dogs,” Rinehimer said.  “We think of them as our children and assume that they perceive the world in the same ways we do.  But no; their senses function differently than ours.”

For example, dogs’ sense of smell is 10,000 to 100,000 times as great as ours.  They have 300 million scent receptors in their noses, contrasted with humans’ 6 million.  Additionally, 40% of canine brains are devoted to smell.  “Dogs use smell to see their world,” Rinehimer said.  This extraordinary ability has been tested; one dog detected the odor of an old piece of meat in a 35-pound plastic container at the bottom of a lake, even under a layer of silt.

Dogs also keenly smell hormones and recognize an individual’s bouquet of scents.   Furthermore, they can sniff chemicals in cancerous cells undetected by medical technology.  In a video, a woman praised her dog for finding a malignant breast tumor that a mammogram and scan failed to pick up.  The crucial clue was the dog’s downcast behavior after repeatedly sniffing the woman’s breast.  A surgical biopsy confirmed the diagnosis.  In ninety percent of cases, dogs confirmed cases of prostate cancer.  Their olfactory detective work has helped warn people of oncoming epileptic seizures, abnormal blood sugar levels and more.   If you are afraid, dogs smell it.  “Dogs know much more about us than we think,” Rinehimer said.

We often talk to an adorable dog in “baby talk,” a high-pitched voice.  Dogs, however, interpret   these tones as that of prey.  That is why they will jump on you when you utter these sounds.  Similarly, the sense of sound is exactly why dogs know when you’ve arrived in your driveway; their ears pick up the purr of your car’s motor, as opposed to that of others.  Dogs with stand-up outer ears funnel sound more acutely than those with flatter ears.

Curiously, dogs and humans are attuned to different ranges of sound.  Dogs can hear in much higher frequencies than we can.  On the other hand, humans hear sounds at a lower frequency than dogs can.  Just as seeing-eye dogs serve people with vision loss, so do they assist people with hearing loss.

Conversely, dogs don’t do as well as people in the areas of taste and vision.  They have only 1,700 taste buds, while we have 9,000.  No wonder that they love their dog food, while our tongues shrink from it!  Dogs have nearly no taste buds for salt; they don’t need them because they get electrolytes from meat and bones.  Dogs’ sense of taste, however, is closely tied to their sense of smell.  Because people use their olfactory senses less, if they pinch their noses while sampling apples and potatoes, they cannot distinguish them.  Neither dogs nor humans like bitter tastes, a protective shield against unhealthful chemicals in some plants.  Dogs prefer the sweetness of fruits; humans will more likely reach for the candy dish.

When it comes to vision, dogs and human also differ.  Dogs see only two colors, blue and yellow, while humans see three, blue, yellow and red.  If your dog favors his blue and yellow toys to his red ones, this is why.  Environment makes a difference.  A dog’s larger pupils enable it to see better in the dark than people can.  Humans see more bright colors than do dogs and are five times more sensitive to light.  Humans see better at distances than dogs.  Good human vision is 20/20, whereas that of dogs is 20/80.  Nevertheless, dogs render great assistance to people with vision loss, as attested to by an NCC-made video of an NCC student with his seeing-eye dog.

Finally, how does that dog of yours know when to expect you home?  “Dogs time your arrival with their sense of smell,” Rinehimer said.  “All of us leave our particular scent on our surroundings.”  As our scent diminishes with time, our dogs sense we have been gone a long time and are due back.

An interesting fact Rinehimer has discovered is that dogs, like humans, are right or left-handed.  Unlike people, however, handedness is related to gender.  Male dogs are usually left-handed while females are usually right-handed.

The event was part of Northampton Community College's NEH series, Humanities Best Friend: Dogs and the Human Saga, which is made possible by a grant from the National Endowment for the Humanities and the generous support of donors.  NCC partners with the Bethlehem Area Public Library, the Eastern Monroe Public Library, Historic Bethlehem Museums and Sites, Bethlehem Area School District, the Monroe County Historical Society, and the Stroudsburg Area School District.