What's Different About the Food Court? 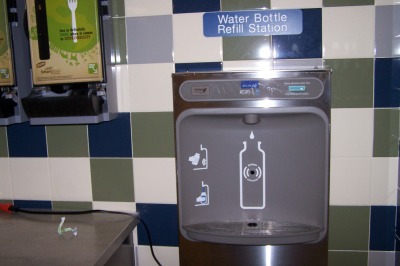 It all started with a talk last spring by environmental activist Jonathan Waterman about plastic pollution in the Pacific Ocean.  The presentation resonated so strongly with NCC student leaders that they banded together to form a grassroots ad hoc committee to examine plastic use on their own campus. Rachel Cimera, Aaron Rosengarten, Phyllis Freeman, Jose Galarza, Emily Gibson, Nathan Solosky, Tyrae McDuffie, and Melissa Hernandez stood at the forefront of the group.

Why the concern about plastics?  According to Scientific American, plastics harm health and the environment in many insidious ways.  For example, they can injure and poison wildlife, spread harmful chemicals into the water supply, and can be absorbed by people to their detriment.

Led by the Bethlehem Chapter of Phi Theta Kappa (PTK) honor society, NCC students joined a national grassroots campaign, "Ban the Bottle," which seeks to eliminate one-time-use plastic containers, substituting biodegradable wheat containers, china, glassware, silverware, and reusable bottles that are free of BPA, an industrial chemical harmful to health. The NCC Ban the Bottle group's goal is to reduce plastic use on campus by 50% in three years and by 80% within five years.

To educate students, PTK chose Ban the Bottle for their Honors in Action project.  Student Life Director Frank Pologruto pitched the idea to the 2014 leadership class, which joined PTK in collaboration.  They then visited Muhlenberg College to confer with students and the marketing director, who had done a similar project on their campus.

They also attended a talk about plastics pollution by environmental activist Frances Moore Lappe.  Supplied with information, they then created a PowerPoint presentation, which they showed to 15 student clubs.  These student clubs, joined by the Student Senate and the Sustainability Committee, formed an ad hoc committee   All the clubs came onboard, unanimously.

After gaining the support of Dr. Mark Erickson, NCC president and Dr. Susan Salvador, vice president for enrollment and student affairs, the students were given the opportunity to present their recommendations to the president's Cabinet, getting their number one priority approved-the removal of plastic water bottles from the food court. Ultimately, the group hopes to eliminate all plastic bottles from the food court on the Bethlehem Campus.

Reusable plastic bottles are for sale for $1 in the food court and the campus bookstore.   Over spring break, the physical plant staff installed two waterfilling stations in the food court.  Students can fill their own water bottles there or purchase a reusable BPA-free bottle.

A grant from National Penn Bank contributed to the setting up the waterfilling stations.

In the near future, the students hope to meet with representatives of the Coca-Cola Company to see whether they will install a new machine that has 200 different flavors of soda.

During Earth Week, the students involved in the Ban the Bottle campaign will hold a reusable bottle give-away, a contest for the most creative repurposing of plastic water bottles, a plastic bottle art installation, a blind taste test of bottled versus tap water, a testimonial wall, and a viewing of a topical film.

"This is a huge step," says Rosengarten.  "But as time goes by, we want to make sure that further implementation runs smoothly.  We are looking for students to help run this campaign after we [the present students] are gone.  We can't just let this die."

"We are proud of the thoughtful approach students are taking to environmental stewardship," Erickson says.  "And we look forward to continuing to work with them toward their goal of reducing plastic consumption."