Working Hard in the Big Easy

The chance of a lifetime was bestowed upon eight culinary students at Northampton Community College:  externships cooking and learning in Chef Emeril Lagasse's famous New Orleans restaurants. The last two days, the students cycled between Emeril's, Delmonico, NOLA, and Meril. 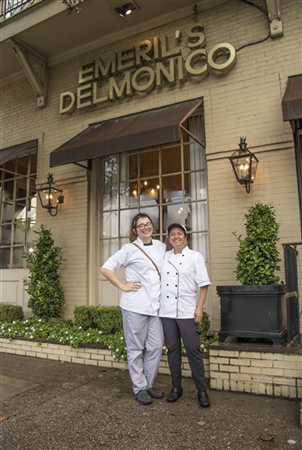 Gina Pearson was awestruck by the specialty room in which Delmonico Restaurant dry-ages all its beef in house.

"We were able to taste all the samples of the dry-aged beef," Gina said, her eyes shining. "It was incredible. The prosciutto was delicious."

One of the things that impressed Hannah Georgis the most was the camaraderie she found amongst the staff in the kitchen.

"They were like family, joking around with each other, but working hard," she said. "They were really cool to us."

Gina agreed. "They totally involved us in what was going out [of the kitchen.] We weren't just chopping potatoes. They had us working on specials and getting plates out. On a Tuesday night at Meril's they had over 300 covers!"

Matthew Campesi's strategy was to enter the kitchens, keep his head down and work hard. "I listened, I soaked everything in that was being said and done around me." 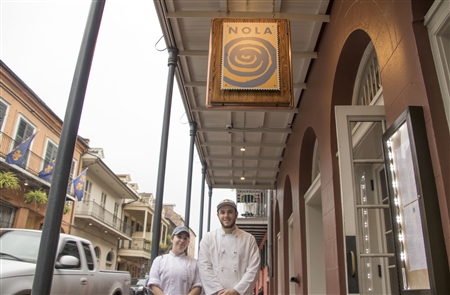 Two of the students, David Kucharczuk and Luke Guensch, got to experience the celebrity side that can come with being a chef. A promo for the Saints/Falcons Thanksgiving game was filmed in Emeril's during the time the two were scheduled to work there. As they prepped for this Friday's Boudin, Bourbon and Beer festival, cameras were rolling as Chef Emeril and famous New Orleans musician Troy "Trombone Shorty" Andrews shot the spot.  You might be able to spot David and Luke in the promo that will air nationwide!

Today, November 8, the students will spend 10-hours prepping for tomorrow's festival, at which they'll work alongside some of the greatest chefs, not only in New Orleans, but the entire country!