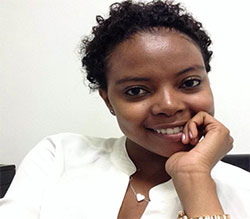 Katlane Seema works as a Site Agent for GVK Siya Zama Construction. Beyond the academic and internship experience she gained while taking classes at Northampton, Katlane had a truly evolutionary experience through which she discovered aspects of her character and professional skill set that she never knew she had.

Prior to applying for, and receiving the scholarship to come to the United States, Katlane completed high school and took a gap year to contemplate her next step. "I was unsure as to what I wanted to do. My mother worked wanted me to be a civil engineer, so I thought that might be the path that I wanted to take." Luckily for Katlane, she performed well enough on her post-high school exams in order to place into the Building Science program at the University of Johannesburg. "The focus of my program was surveying and estimating the cost of projects," something that aligned perfectly with the Construction Management program at NCC.

Though Katlane did not chose NCC initially (the program works in a way that the applicant chooses the subject that they would like to study, and they are placed at an institution that will be best for them to pursue their goals) she couldn't have been happier with the placement she received. During her first visit, she completed some courses and the volunteer work that was required of her. At the end of the spring semester in 2012, she went home to South Africa; but not for too long.

For Kat, coming to NCC for a year was just not enough. Following her yearlong program funded through a scholarship for international students, she returned in order to complete her degree. "I had not completed what I was supposed to when I was there the first time," she continues, "My heart was still at NCC and I had not reached the point I needed to the first time." In January of 2013, Katlane returned to NCC, completed the Construction Management program, was the President of the International Student Organization, completed the Spring Leadership Program, participated in a variety of other student organizations, and assisted in the building of the Monroe Campus during her practicum and working on the building committee for the new dorms was a cheery on top as it was a way of giving back to a place she calls home.

"Being in the states teaches you that the harder you work, the more you can get," she said, "I felt no entitlement. At NCC, we were taught that the more you work, the more you could do." In her opinion, some of the most important things she learned were the importance of networking and interpersonal communication; "Sometimes it's not about what you know, but who you know. At the end of the day, you have to know how to be able to work with people." She attributes her development in these areas to the spring leadership course and Frank Pologruto (Director of Student Life & Leadership Development), "I thought I was an extrovert, but Frank realized that I was really an introverted person. His program helped me to become more comfortable in making small talk with people and giving my elevator pitch." This is a skill that Katlane feels has been essential to her professional successes.

After graduating from NCC, Katlane returned home, completed her Honors degree program there, and began the search for employment. The process that she went through to find the job is the same as what it is the United States; she found an opening, put together her resume and cover letter, and sent it to potential jobs. The first position she took was a Project Coordinator role at Mabro Engineering- a pipeline company. Although it was a job in her industry, it was not exactly what she wanted to be doing, "I wanted to be working more in the field and this was more of an office job." After taking some time to think about it, Katlane left the job in the search for something else, "I felt like I owed it to them," she said, "They saw the potential I had, but I was not living up to it. I feel as though a person should always put 100% into whatever they are doing; I wasn't doing it there, so I needed to leave."

Fortunately for Katlane, she was able to use her networking ability to market the valuable work experience she gained throughout her years spent as a student. "Companies value students who involved on campus and in work experience throughout their education. It helped me to be able to get jobs after I graduated." In addition to her work, Katlane's passion for leadership development that she gained through participating in programs at NCC as continued. She is part of a group that founded the Young African Leadership Initiative in her community. A charitable organization designed to help young people build their leadership skills and the Deputy Chairperson for a Non-Governmental Organization (NGO) called Lolo-Lera foundation which helps young people realize that through Arts & Culture, you can be able to go anywhere and do anything when you set your mind to it.