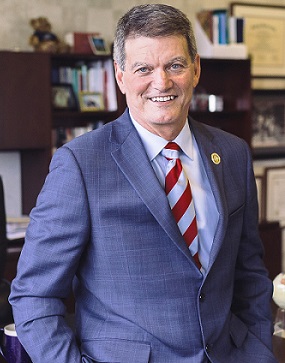 Dr. Mark H. Erickson became the fourth president of Northampton Community College on July 1, 2012, driven by a strong belief that the most innovative, exciting and important work in higher education was, and is, taking place at the nation’s community colleges. Initially attracted by NCC’s commitment to access for all students, its student-centered focus and entrepreneurial spirit, his affinity to the communities Northampton serves and his long-standing admiration for the work of the college hasn’t wavered.

A native of Nebraska, Dr. Erickson holds a bachelor's degree in American history from Princeton University and a master's degree in education from Harvard University. While earning his doctorate in educational leadership at Lehigh University, he received the Mathew W. Gaffney Award for Academic Excellence. He served in several important positions at Lehigh, including dean of students from 1990-1999, associate vice president and executive assistant to the president from 1999-2001, and vice president for administrative and government affairs from 2001-2005.

In 2005, he was named president of Wittenberg University, Springfield, Ohio. During his seven years there he was credited with facilitating the development of new academic programs, expanding international exchange opportunities, and fostering a close and mutually beneficial relationship with the regional community.

Under his leadership as president of Northampton Community College, the institution has thrived. The college was selected as one of the top 150 community colleges in the nation by the Aspen Institute in 2014, the same year NCC opened a new $72 million 84-acre campus in Monroe County, Pa. In 2019, NCC was the only college in America to receive a Green Power Leadership Award from the Environmental Protection Agency in recognition of environmental leadership.

NCC was also selected as one of four recipients (from 114 applicants) for the first 100,000 Strong in the Americas Grant and was later awarded a $10 million federal grant as the lead partner in a three-college consortium to prepare residents of northeastern Pennsylvania for high-demand careers.

In the process, NCC students have consistently garnered national and state honors for academic achievement. College faculty members have also been recognized, with three individuals selected as Pennsylvania Professor of the Year by the Carnegie Foundation for the Advancement of Teaching and the Council for Advancement and Support of Education.

Other areas of the college have also shined, with NCC recognized four consecutive years as one of the top community colleges in the country for advances in technology by The Center for Digital Education. The institution was also singled out for excellence in fundraising by the Council for Advancement and Support of Education; and as the "best place to work" among large employers in the Lehigh Valley in 2013.

In fall of 2018, NCC opened the Follett Family Center for Innovation and Entrepreneurship to provide an open learning environment that sparks an innovative spirit and leverages state of the art technology to drive an entrepreneurial mindset. The multi-million dollar center features a 7,500 plus square foot Fab Lab that includes the Martin Guitar Luthier Lab and lab spaces for electronics, computers, 3D printing, metals and machining, woodturning, woodworking, and audio recording.