The NCC exhibit by watercolorist Frank A. Pietrucha was curated by his daughter

For Dr. Diane Fischer organizing exhibits has long been part of her professional career.  Curating "For the Love of Art," an exhibit of paintings by her 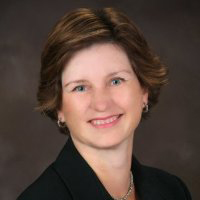 "The results have a more personal meaning," Fischer shared at a gallery talk at Northampton Community College (NCC) on September 10. "It was a wonderful opportunity to truly understand quite a character who found joy and beauty everywhere."

Fischer is a professor of art history at Cedar Crest College, the former chief curator of the Allentown Art Museum and a former associate curator of the Montclair Art Museum. The tribute she organized highlights the mainstay of her father's seven-decade career - landscapes and architectural scenes. These paintings reveal the way he saw the world, in a delightful and often humorous manner. Touches of whimsy abound in his paintings:  a charming goat, clothes hanging out to dry in front of a lighthouse, a hen pecking the ground, and a cat playing with a ball of yarn are just a few examples.

Pietrucha painted lively scenes of Bermuda, Europe, New England, Cape May, and other places. His paintings gleam with color and life, a reflection of his dynamic personality.

"He loved to travel, he sang with his church choir, he loved to dance. He was so light on his feet he reminded me of Fred Astaire. He was a gardener. I called him the Monet of West Orange," reminisced Fischer. 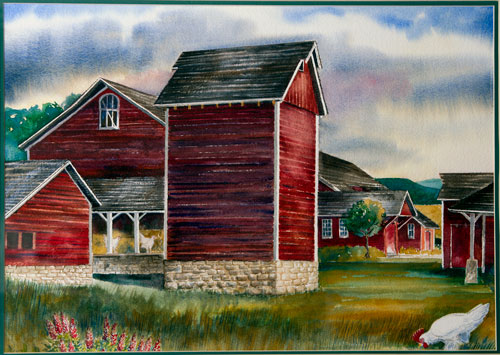 Born in Newark, New Jersey, Pietrucha was the sixth of seven children of Polish immigrants. He lived in Newark, West Orange and Basking Ridge before moving to Bethlehem in 2013. He graduated from the Newark School of Fine and Industrial Art in 1949, where he studied with Reuben Nakian, John Grabach, Hans Weingaertner, James Carlin, E. Stanley Turnbull, and Avery Fischer Johnson.

"Because Newark is so close to Manhattan, the school drew very famous faculty, the most famous being Reuben Nakian," said Fischer. "My father named Nakian as one of his biggest influences. But there is little resemblance between their subject matter, medium, or style. Knowing Dad he might have just been name dropping," she joked.

James Carlin is a more likely influence, Fischer believes. They both were inspired by nature. "But I paint the scenes the way I want them to look, not as they really are" Fischer said her father told her.

After marrying Fischer's mother, Dorothy Bol, Pietrucha worked as a graphic designer. Together they had three children, including Fischer. He did not have time to pursue fine art zealously until he opened his own business at home in 1973. Then he became very prolific. He exhibited in numerous group and thirteen one-person exhibits. A member of the highly selective New Jersey Watercolor Society, his work is represented in numerous private collections as well as at the Montclair Art Museum and the Herbert F. Johnson Museum at Cornell University.

The exhibit took Fischer almost 8 months to curate, with the help of Thomas Shillea, director of NCC's art programs. 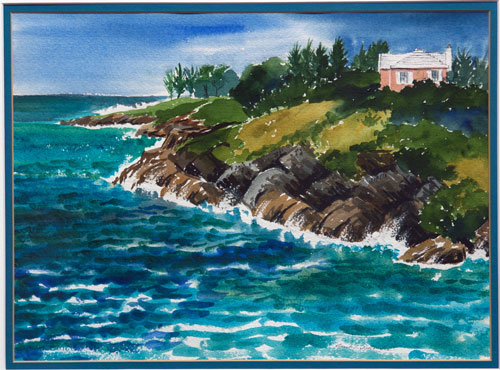 "My father left a legacy not many can achieve:  hundreds of water colors that make me smile and remember the very special way he saw the world," shared Fischer.

"For the Love of Art" will run through October 26 in Communications Hall on Northampton's Bethlehem Campus at 3835 Green Pond Road. The gallery is open to the public free of charge from 8 a.m. - 7 p.m. Mondays through Thursdays and from 8 a.m. - 5 p.m. on Fridays and Saturdays. It is closed on Sundays.