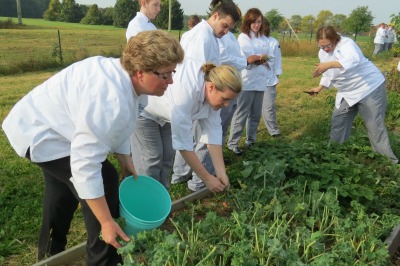 Northampton Community College (NCC) has been chosen to receive a $156,340 grant from the National Endowment for the Humanities (NEH) according to an announcement made by NEH officials on December 14.

The grant is one of the first awarded through NEH's new "Humanities in the Public Square" initiative which is designed to fund projects that draw on humanities scholarship to engage the public in understanding some of today's most challenging issues and pressing concerns.

Northampton and community partners including RenewLV, Second Harvest Food Bank, the Hispanic Center, BuyFresh,BuyLocal Lehigh Valley, and the Penn State Agricultural Extension will focus on the examination of the human relationship with food and how we can ensure an adequate, safe, and appropriate food supply for the Lehigh Valley.  Programming will include three public forums, community-based workshops, cooking demonstrations, writing projects and film screenings, connecting the topic to the experiences of residents of the Lehigh Valley and inviting them to use the humanities to think critically about their personal role and the role of their community in the food system.

Events will be held in urban neighborhoods where residents face the challenges of low income and high unemployment.  Programming will begin in May, be widely advertised, and will culminate in a report-out and discussion of the findings in October.

This is the third major grant Northampton Community College has been awarded by the National Endowment for the Humanities.  In 2008 NCC received a "We the People" grant which, along with contributions from private donors, enables the College to engage the community in exploring topics that enhance the public's understanding of American history and culture.  A grant in 1991 helped to establish a lecture series and an endowed chair in the humanities and to expand library resources in the humanities.

"The NEH has a been a leader in recognizing the role community colleges can play in promoting the study of the humanities among Americans from many walks of life," says Northampton Community College's president, Dr. Mark Erickson.  "The insights that can be gained from an understanding of history, philosophy, the arts, and related fields are important not only in enriching our personal lives, but in preparing all of us to become engaged citizens in a democratic society."