Cooking Alongside the Country's Best Chefs

Culinary students prep next to world famous chefs in NOLA

It was a moment any foodie would have wanted to be a fly on the wall.  In the Hilton Riverside banquet kitchen in New Orleans, executive chefs from Emeril Lagasse's restaurants in Las Vegas, Bethlehem, PA, and New Orleans were prepping for a 650-plate, five course meal under the direction of Chris Wilson, culinary director of Emeril's Homebase.

The meal is for the Carnivale du Vin, the Emeril Lagasse Foundation's signature annual fund raising event, which has raised millions of dollars since its inception in 2005. The only other people in the kitchen besides this super star assortment of chefs were Northampton Community College culinary students and Chef Francine Marz, directory of NCC's culinary programs. The students learned this past June that they had won all-expense paid externships to work in Chef Emeril's New Orleans restaurants. What they didn't know at the time was that they'd also be helping at two of Emeril's biggest events of the year, the Carnivale du Vin and the kick-off event the night before, the Boudin, Bourbon & Beer festival, one of New Orleans's premiere outdoor food and music festival, which averages about 5,000 attendees.

The students walked into the huge kitchen, knife kits in hand, and were welcomed by Chef Wilson. 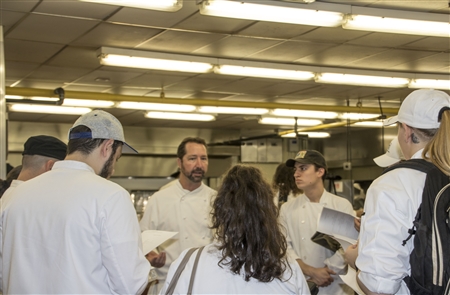 "The guests are expecting a Michelin-quality dinner," he told them.

You could almost hear the collective gulp among the students, but they were quickly absorbed into the kitchen and put to work right alongside expert chefs such as Sean Roe, culinary director for Emeril's Las Vegas restaurants, and a familiar face, Victor Bock, culinary director of Sands Bethlehem, and Chef Tyler Baxter, an NCC grad and the very first winner of the Emeril externship experience, who is now Chef de Cuisine at Emeril's Chop House.

Before long, any anxiety faded as they worked side by side with the chefs, chopping, dicing and doing whatever was asked of them for about 8 hours.

They worked hard. When I asked student Matthew Campisi what it felt like to be working alongside this caliber of chefs, he shook his head. "I won't be able to absorb all of this until I get home."

As they worked, other chefs began to fill the room, to begin their own prep or check on their ingredients. Anthony Hoy Fong, director of culinary operations for Guy Fieri, set up next to the students and Chef Marz, who helped him break down pork, prepare a spice rub, and make boudin sausage. Beau Macmillan, executive chef of Phoenix's Sanctuary on Camelback Mountain, came in to check on his ingredients for Saturday's dinner, sampling some crab before nodding his approval. Team members for Chef Traci Des Jardins, who has multiple restaurants in the San Francisco area, including the award-winning Jardinière, unloaded supplies and checked on the equipment Chef Des Jardins would be using.  Chef Masaharu Morimoto made a brief appearance at one point, which was one of many highlights for the students.

Besides the incredible networking opportunities, according to Chef Marz the biggest takeaways for students are "understanding how to feed that large of a quantity with quality, exceptional food, learning to work under pressure and deadlines, and how tight knit the culinary community is."

Tonight, the students will be in Champions Square, working wherever needed to provide food for the five thousand plus guests in attendance. Tomorrow, they'll be finishing and plating the Michelin-quality dinner for the Carnivale du Vin. They return home on Sunday morning, where they are sure to be exhausted but also enriched by a truly once-in-a-lifetime opportunity that many culinary students can only dream about.