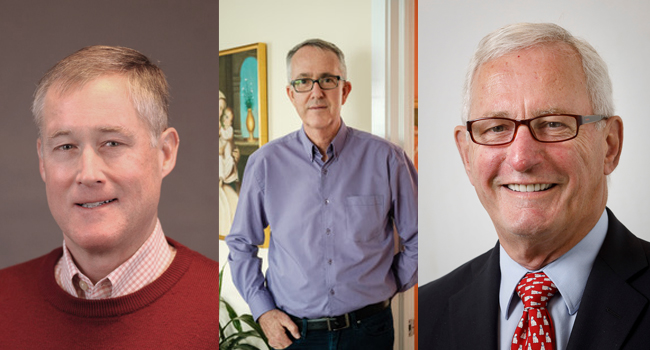 The Follett Family Center for Innovation & Entrepreneurship (CIE) at Northampton Community College (NCC) has announced three prominent entrepreneurs and business leaders who will serve this fall as Entrepreneurs-in-Residence at the CIE. They are Steve Follett, former CEO of the Follett Corporation, Attorney Fred Rooney, and Peter Luethi, co-founder at Dreamjet SAS.

Each of the distinguished entrepreneurs will serve as Entrepreneurs-in-Residence, in which they’ll share lessons learned from their years of experience with students and with the local community. The entrepreneurs are also slated to speak during the 1 Million Cups program, a free event held Wednesdays at 9 a.m. and open to the Lehigh Valley. During 1 Million Cups, small business owners and entrepreneurs with businesses under five years old can come to present their business ideas for community feedback.

The dates the entrepreneurs will be coming to the CIE are:

Follett was the chairman and CEO of the Follett Corporation, a worldwide manufacturer of ice machines and medical grade refrigerators, for 25 years before retiring in March 2019. The generous support of the Follett Family played a major part in the development of the CIE. He has a bachelor’s in industrial engineering and operations research from Cornell University and an M.B.A. from the Kellogg School of Business at Northwestern University.

With an extensive background in aviation and multicultural organizations, Luethi learned marketing and management during his time at educational institutions, including Harvard University, making him an expert on what it takes to run a business. Currently, he is the co-founder and advisor for the CEO of Dreamjet SAS, stationed in the USA. Luethi is a member of the CIE Advisory Board.

Rooney has a strong understanding of bicultural/bilingual studies and law. With 35 years of experience as an attorney both nationally and internationally, Rooney has a deep passion for the enhancement of justice and economic opportunity. In January 2010, he was awarded the 2010 Father Robert Drinan Award by the American Association of Law Schools (AALS), and in 2010 he accepted the ABA’s Louis M. Brown Award for Legal Access on behalf of CUNY Law.

The program is open to the public. For more information on the schedule of events during the Entrepreneurs-in-Residence program, email rbhattacharya@northampton.edu or call the CIE at (610) 332-8661.