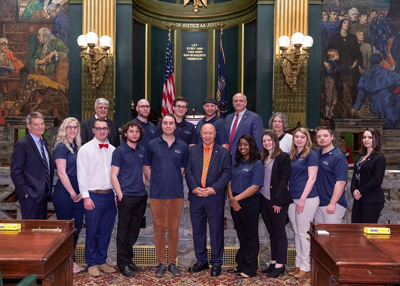 At the Pennsylvania Commission for Community Colleges’ Annual Lobby Day at the Capitol on April 9, students, trustees, presidents and staff from Pennsylvania’s 14 community colleges joined together to advocate for an increased funding level in the 2019-20 fiscal year budget.

The budget proposed by Gov. Tom Wolf does not provide an operating or capital funding increase for the colleges, despite being the largest provider of public postsecondary education in the Commonwealth and a sector that plays a significant role in the Commonwealth’s education and workforce development systems.

In the 2017-18 academic year, Pennsylvania’s community colleges enrolled more than 300,000 students from all 67 counties in the state. They also provided a foundation for nearly 35,000 students who sought transfer to four-year institutions, saving these students up to $20,000 on the cost of higher education.

In addition to the rally at the Capitol, the NCC group is grateful to the following state legislators for taking time to meet with them: Senators Lisa Boscola and Mario Scavello and Representatives Rosemary Brown, Joe Emrick, Robert Freeman, Marcia Hahn, Maureen Madden, Zachary Mako, Jack Rader, Jr., Steve Samuelson, and Justin Simmons.