Work your way to the top of the summit 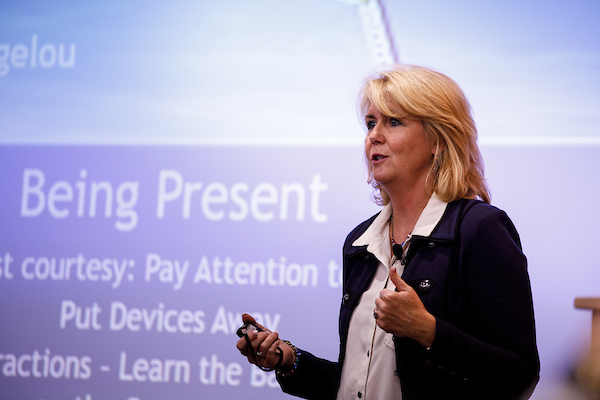 Keynote Anne Baum, vice president, Lehigh Valley, Capital BlueCross, shared from her book Big Mistakes, Big Consequences, as she spoke to a room full of eager students ready to soak in her sage advice on April 5 during the Second Annual Spartan Summit on Bethlehem Campus.

Baum said that you must raise your awareness around how you are perceived. First impressions set the tone about you. Be cognizant of your verbal and non-verbal behavior so that you can put your best foot forward. This was the first great piece of advice in a series of many. She discussed a time she talked to a man on staff who came across brash and rude in his e-mails to co-workers. Everyone dreaded these e-mails and started to dislike this man’s attitude. Baum said, “I was the only one who told him how his e-mails were perceived, and he was completely taken aback by how he was coming across. He changed the way he formatted his e-mails from that point forward.”

In her presentation to students, she listed things that she wanted everyone to do. “Find courage” was one. “Avoid assumptions like reasons you think you won't get hired or won’t get the interview. People think this way, and they don't apply to jobs they want,” she said, and continued with, “Overcome your head trash, which are all the reasons you tell yourself why you're not good enough. Turn your negative thoughts into positives.”

“Don't be afraid to fail and learn from your mistakes,” Baum emphasized, telling students it’s okay to be rejected or to go for something you really want and realize you don’t want it anymore. She showed the audience a road map of those who have reached success. On the map, along the way, were failure pit stops, which she said were normal and healthy to help someone grow.

“Have integrity. It drives trust and makes you a better leader,” Baum told students. Part of that is listening. “Most of the time, we're not present and in the moment because we're worrying about things we have to do, our Instagram feed, and anything other than where we are,” Baum stressed giving your undivided attention to people.

Develop a plan for success, pick a dream, and take a risk, a recipe Baum said will set anyone up for success.

“The worst that can happen is you do something else and change your mind about what path you follow. Go confidently in the direction of your dreams, and have faith it will work out with hard work.”

After the keynote, there were three breakout sessions with area professionals, Do’s & Don’ts of Interviewing, Navigating the Transition from Backpack to Briefcase, and Critical Thinking – Things I Wish I Knew Before I Started My First Job. 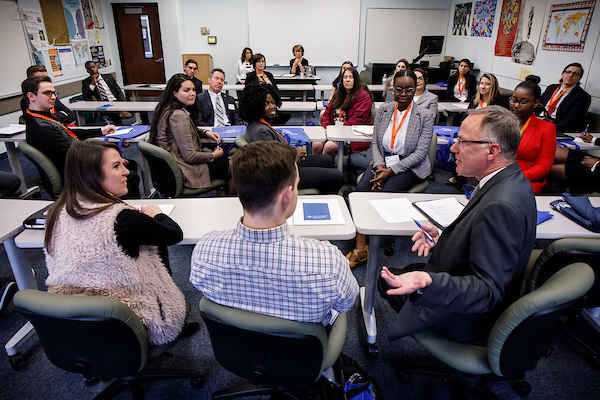 Phil Koury, owner of KouryWeb, discussed emotional intelligence. “You need to be able to set yourself apart by understanding what makes you a good candidate other than your skill set. Know the technical side of your job, but also the emotional/personality side. I want someone friendly in the front of my office because it’s the first persona customer sees. I don’t just want someone who knows the books.”

Madeline Falcone said, "I've learned something every career move, every interview and I’m constantly evolving and learning. One thing I learned was that volunteer experience shows your willingness to go above and beyond. Volunteering will allow you to build a network and social circle. It gives you a leg up in an interview.”

In a mock interview session, students watched as two NCC staff members demonstrated a bad interview and asked what things the interviewee did wrong. Panelists talked about some of the fumbles they have seen in their interview experience. Dave Yanoshik, associate vice president of marketing and public relations for St. Luke’s Health Network, said, “If you do make a mistake, acknowledge your misstep, move on, and don't focus on it.”

In another session, Andrea Weismiller vice president of sales and marketing for Joshi Hotel Group, asked, "What's the purpose of networking tonight? "Students said things like self-development, elevator pitch, building relationships. Nicole Dotta, director of new business development at ArtsQuest suggested students get to know panelists before engaging with them. “You were given these packets at the beginning of the Summit that have all of the panelists’ information. Read our bios, and ask us about our work and company.” A big don’t? Don’t ask for what you want right away, especially if that’s a job.

On that note, students headed to a networking mixer and made connections with professionals, NCC staff and other students that they hoped to build on in their future.