Vietnam War-era peace/anti-war posters hung from the curtains at Northampton Community College's Lipkin Auditorium on October 19, when the College held its all-day annual Peace and Justice Conference and its Cohen Lecture.  Professor James Von Schilling, an organizer of the event, noted that the day was the fiftieth anniversary, exactly, of the March on Washington to end the Vietnam War. Tens of thousands of protesters helped to halt the conflict, which claimed more than one million Vietnamese and at least 55,000 American lives.

Rinku Sen gave the Cohen Lecture, which also served as the keynote address.  She is the senior strategist of Race Forward-The Center for Racial Justice Innovation, which publishes a daily online newsletter and the author of The Accidental American: Immigration and Citizenship in the Age of Globalization.  As the leader of a national organization, she played a part in the passage of DACA (Deferred Action for Childhood Arrivals). 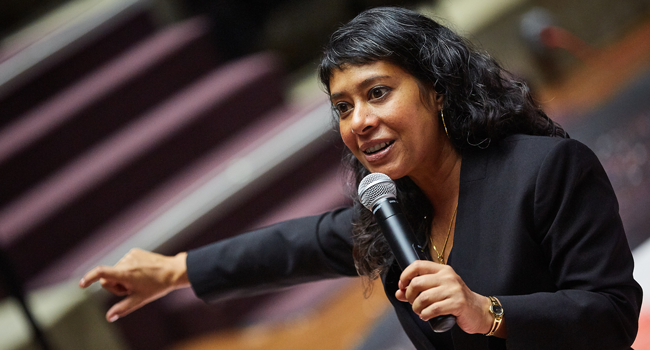 She began her talk with the story of Jennifer Massia, a 27-year-old waitress who turned a spotlight on her restaurant's practice of "tipping the house," whereby managers appropriated a percentage of their employees' tips and wages.  At first, Massia conceived only of rallying the all-white wait staff to challenge this illegality, but soon realized that the dishwashers and cooks working "at the back of the house," mostly Central American and Bangladeshi immigrants, were eager to become involved.  The activism of a united group, aided by The Restaurant Opportunities Center, brought about the elimination of injustices throughout the restaurant sector.  "The lesson from this [case] is that immigrants make things better for everyone," Sen said.  "But now we're hearing stories of fear and loathing, walls and fences."

Both Republican and Democratic administrations bear responsibility for the current disdain of immigrants, and by extension, people of color, who may be perceived as immigrants, she said.  After 9/11, moves toward legalization reverted to those of exclusion, with the replacement of the Immigration and Naturalization Service's role by that of the Department of Homeland Security, a part of Immigration and Customs Enforcement.  This shift has especially benefited the private prison industry, which depends for its existence on filling cells.  Sixty-two percent of incarcerated undocumented immigrants occupy these prisons.  As a consequence of their parents' imprisonment and deportation, five thousand children lived in foster care in 2011, according to the report "Shattered Families" by Race Forward.

Sen believes that our country's immigration policy is made in a vacuum, without regard to the circumstances driving immigration, principally global economic conditions, natural disasters and war.  Besest by misery, "human beings will always move to a better place," she said.  Moreover, the notion of immigrants depriving others of jobs is false; on the contrary, immigrants pay income taxes.  But they do not receive the social and health services supported by their labor.  "We want labor, but not families, cultures, and languages," Sen said.

Treating immigrants with contempt is not new, she pointed out.  She discussed the hostility that Irish newcomers, fleeing starvation during the Potato Famine of the late 1840s, experienced.  Public media portrayed them as brutish.  Signs saying "No Irish Need Apply" fronted many businesses.  In another example, the Chinese Exclusion Acts, from the 1880s to World War II, barred the families of Chinese laborers and other East Asians from entering the country.

And yet "immigrants have given us so much," Sen said.  The labor movement, founded almost entirely by early 20th-century immigrants, brought about workforce health and safety requirements, pensions and the eight-hour day.   Now, President Donald Trump is threatening to repeal DACA, unless Congress approves funds for a border wall.   "Dreamers are being  held hostage," Sen said.

Overall, in today's anti-immigration climate, what can we do? Sen asked.  She posited three solutions:

We should also not avoid talking to those whose opinions differ from ours, Sen said.  "We can get there by loving our people and our questions," she concluded.

Outside the auditorium, peace and justice organizations offered information about their groups' work.

This year's Peace and Justice Conference was co-organized by Professor Kiki Anastasakos. 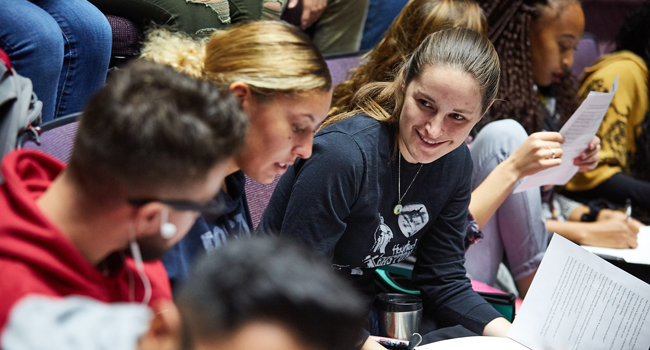