The Good Life, As Viewed in Film 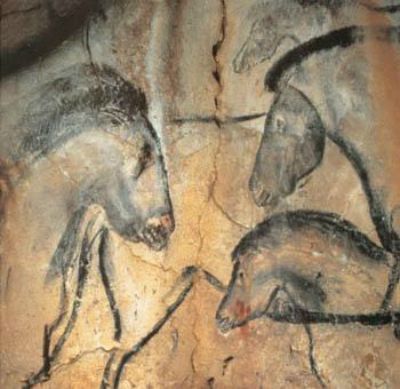 What did prehistoric humans, living 32,000 years ago in a Europe without agriculture, bronze and the wheel, consider The Good Life?  And at a time when they shared the stage with large, predatory animals and another species of humans, the Neanderthals?  What do people of today, with the Internet, gene splicing and nanotechnology see as The Good Life, and is it really a good life?

Dr. Rebecca Dean, NCC professor of communications/theatre, had students in her Introduction to Film classes on September 17 pondering these questions, as viewed through the lenses of two documentaries: The Alphabet by David Lynch (1968) and Cave of Forgotten Dreams by Werner Herzog (2010).

Dean decided to synchronize this semester's film course with this academic year's National Endowment for the Humanities/NCC theme The Good Life.  Each of the films can be examined in this light.  Other films are also used in the course to probe The Good Life.

Between and after the films, Dean made observations infused with psychology, sociology, philosophy, literature, and even statistics of American families' debts.  She called upon viewpoints of the Buddha; Tom Ripley, actor Matt Damon's character in the Talented Mr. Ripley; psychologist Abraham Maslow, who formulated the famous hierarchy of needs; and George Orwell, author of 1984 and Animal Farm.  She additonally brought in the Wizard of Oz and Alice in Wonderland.

Why do we care about living a good life?  "The unexamined life is not worth living," Dean quoted from Socrates.  Aristotle expanded this formulation to mean an active as well as an examined life.  Dean following these ideas with a summary of the Hedonist, Stoic, and Fatalists' philosophies of what constituted a good life.

The first film shown on September 17, The Alphabet, a six-minute experimental movie, is based on a young girl's nightmare.  Dean uses it as an example of what the good life is not.  It also demonstrated how a director can create meaning out of abstract images and sounds and their associations -- in this case a dream.  Alphabet letters resound rhythmically and float visually through the dreamer's mind, morphing into other symbols.  A capital "A" for instance, graphically gives birth to a lower-case "a."  The images are accompanied by whistling, voice-like, industrial and birdlike sounds.  The dream's horror literally sickens the sleeping girl when she briefly awakens.  There is no plot or dialogue.

"Dreams violate the laws of physics.  They take the usual and make it unusual, the normal abnormal," Dean said.

To Dean and her students, The Alphabet represents the rote memorization typical of early education in some quarters and that plague the sleeper's dream "In a true education, the professor does not pour knowledge into a student; he or she instead pulls it out of them."  She told the class that, "the knowledge and awareness is in you."

Modern Americans live anxiety-filled lives, Dean said.  One source of this anxiety stems from societal pressure to acquire status goods, such as expensive cars, as a measure of the good life.   The high cost of living, alone, causes tremendous stress.  Then there is the frenzied pace of American activity, which, Dean said, is faster-paced than European life.

As remote and obscure as dreams are, the Chauvet Cave paintings in southern France are even more unknowable.  Dating back 32,000 years and accidentally discovered in 1994, the caves have enormous chambers covered by the paintings and etchings of prehistoric people-beautiful and powerful depictions of rhinos, horses, antelope, bisons, ibex, panthers, leopards, and the long extinct cave bears and cave lions.  "The cave painters lived in a rich biosphere," said Dean.  "Their art portrays people whose knowledge of their world was profound."  Human depiction is limited to one drawing, that of a woman's lower body attached to a bison's head, calling to mind, the film says, the ancient Greek myth of the Minotaur, part human and part bull.

The cave contains the earliest and best-preserved cave art in the world and has been designated by the United Nations as a World Heritage site.  Shielded by an ancient rockslide, the cave was accidentally discovered in 1994.  The French government closed it to the public immediately after its discovery, to preserve it from the mold-forming human breath that has caused deterioration other ancient caves.  At the French government's request, Cave of Forgotten Dreams was made just before the cave was sealed forever, in 2010.

Cave of Forgotten Dreams follows a small group of scientists and cinematographers as they descend a steep ladder deep down a sheer drop.  These explorers and documentarians were allowed one hour inside this fragile place and had to traverse it across a two-foot wooden walkway.  But only to a certain point-beyond this location, the cave emits deadly fumes.

The film's narrator points out the cave artists' sophistication.  Some four-legged animals, for instance, are shown with eight legs.  The extra legs suggest movement, in basically the same way a motion picture does, by separate images shown in quick succession. Many of the pictures tell a story. For instance, one of the drawings shows two rhinos butting heads in battle.

The most intriguing question raised by the film is the cave's purpose.  One clue to the Chauvet Cave's possible use is its floor, strewn with the skulls of animals but lacking in human bones.  This absence leads scientists to believe that the cave served a ceremonial, religious or artistic purpose rather than as housing for people.  Distinctive human handprints identify the artists as different individuals.  One set of handprints, identifiable by a crooked finger, signifies an individual whose work occurs in more than one place.  Scholars believe that a rockslide closed off the cave for tens of thousands of years, and that there are actually two eras of art represented, separated by about 5,000 years.

Particularly mysterious are two sets of side-by-side footprints, that of a child and a wolf.  Dean asked: are the pair walking together as companions, as predator and prey, or were the tracks made at separate times?  If the child and wolf were companions, does this amity suggest a "golden age" of harmony between people and wild animals?

About Cave of Forgotten Dreams, Dean said that the film shows how humans adapt and how they communicate with the future through art.  "This is the same in our world," she said.

She believes that prehistoric people did not place barriers between humans, animals, and the supernatural.  Trees could be angry, as humans could be.  Ultimately, however, Dean and the film's scientists conclude, we cannot understand the cave artists' beliefs or worldviews after such an abyss of time.

Dean does know what, for her, is a good life.  "What gives us professors a good life is your success," she told the students.