Recent U.S. Presidents: The Inside Scoop

Inside the White House 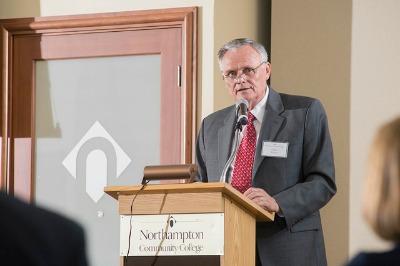 During President Jimmy Carter's administration, Gary Walters, chief usher at the White House, faced a dilemma.  Across a ping-pong table from the President, he grappled with a question: should he play his usual competitive game, or let the President win?  Walters decided to go all out, and although Carter was a good player, Walters won.  Carter turned out to be a good sport about it.

Before becoming chief usher, Walters worked at the police control center at the White House, during the Nixon administration and was an understudy to assistant ushers in the Ford and Carter administrations.

A White House chief usher juggles many responsibilities.  Walters worked directly for the Presidents, their families and guests.  The White House, after all, is the President's home as well as a venue for official and ceremonial functions and a museum of American history visited by more than one million people each year.  "Ushers guard the family vigorously," Walters said.

Moreover, a chief usher supervises ushers; curators, who care for the furniture; calligraphers; florists; housekeepers; food and beverage staff; and six butlers.  "It is the consummate This Old House," he said, with carpenters, electricians, painters, and plumbers busy at work.  In addition, the chief usher supervises 24 members of the National Park Service, tracks budgets and keeps records of events.

After a fascinating history of "The People's House," the home of every president except for George Washington, Walters told anecdotes from each administration:

Richard Nixon: contrary to his public image, Nixon was kind and gentle in private.  He loved to talk about baseball.

Although Jackie Kennedy did the most to redecorate the White House, Pat Nixon deserves credit for renovation, too.

Gerald Ford: "The Fords were two of the most approachable people you'd ever want to meet," Walters said.  One Sunday, at 8:00 a.m., Walters's phone rang:  On the other end was President Ford.  "Good morning, Gary," Ford said, "I don't have hot water, and I have to get ready for church."  He added, "There's no hurry.  It's been that way for a couple of days.  I've been using Betty's shower."  "It was a heady feeling, to have the president address me by my first name," Walters said.

Jimmy Carter: Carter's daughter-in-law Karen gave birth to the first grandchild born to a sitting President  in many decades.  Carter liked to keep the White House at 65 degrees.  The drafty ushers' office grew even colder, so the ushers removed the visible part of the thermostat and wrote 65 degrees on it, though in reality the temperature had been turned higher.

Ronald Reagan: "What you saw was what he was," Walters said.  Reagan's behavior stayed the same, in front of a TV camera and behind the scenes.  "He always had a smile and a good word," Walters said.  During Reagan's meeting with the Soviet leader Mikhail Gorbachov, flames burned in a fireplace behind the two seated men.  "I could feel the Cold War thawing," Walters said.

Reagan had the habit of feeding acorns to squirrels who would gather for the purpose outside the Oval Office windows.  One day, when Reagan was away, an indignant group of squirrels made a racket scratching at the glass.

George H. W. Bush: "Every president and his family were kind," Walters said.  "But there will never be a nicer family than the George H. W. Bushes."  He called George H. W. Bush a consummate gentleman.  "Barbara has the quickest wit I've ever known.  For her birthday, her husband bought her comfortable shoes -- pairs of Keds in all of the brand's eight colors.  Barbara took to wearing a different color sneaker on each foot.

Bill Clinton: The Clintons asked the ushers for ideas for Chelsea and her friends during the Inaugural parties.  The ushers created a history scavenger hunt and an entertaining quiz about American history.  For Hillary's birthday, Bill arranged a costume party.  The White House staff surprised the family by dressing in costume too.  Socks, the White House cat, had a favorite place to bask in the sun: on top of a computer in the ushers' office.  Bill Clinton loved to talk and had a remarkable memory for people and their families.  His talkativeness gave him a reputation for tardiness, however.  In fact, he was almost late to George W. Bush's inauguration.

George W. Bush: "George W. Bush was an athlete of extraordinary skill," Walters said.  He ran in all weather.  He formed a "98-degree club," with staff, who also ran in 98-degree weather.  When damage occurred to his legs, Bush turned to off-road biking.

Walters' most terrifying day at the White House was on September 11, 2001.  He is convinced that the hijackers of Flight 93 were intent on crashing into the White House, not the Capitol Building.   At the time, a picnic, attended by many dignitaries, staff and Walters himself, was taking place.  Walters believes that if it were not for the passengers who intercepted the hijacking, he and many government officials would have been killed that day.

At the end of the event, Dr. Mark Erickson had each of the culinary students who worked on the dinner introduce themselves and say a few words about themselves.

See more photos of the evening in this  gallery.