A holiday celebration on Bethlehem campus full of cheer 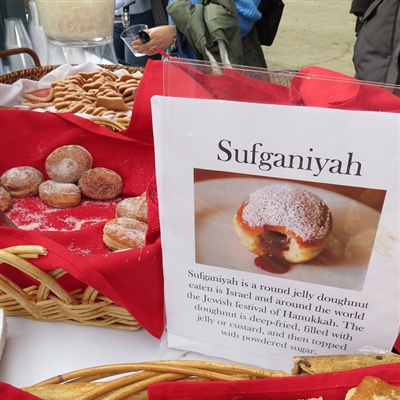 Once a year near the end of the Fall semester everyone gathers in the Quad to celebrate many holidays from around the world.

Coloring and winter themed crafts were at Winterfest as a part of Stress Busters Week.

International Student Organization with the help of Sodexo contributed foods from around the world that are traditional parts of celebrations this time of year, such as Pineapple Tarts which are a Chinese New Year treat. The countries with foods displayed represent the international students on campus. Malaysia, Puerto Rico, Dominican Republic, Singapore all were represented in the Quad, just to name a few.

The Christian Fellowship Club sponsored a Live Nativity Scene including livestock that students, faculty and staff could pet and feed!

Student Senate equipped with Santa, elves, and Mrs. Claus all took a ride on their sleigh while enjoying the festive holiday music from all over the world...Rudolph with his shiny nose was even there! Reibman Hall Children's Center was invited to bring children over to see and take pictures with Santa. I even heard a rumor the President was with him!

Band of Brothers had holiday cards to send to Veterans and soldiers serving our country who can't be home with their family at this time of year.

Hispanic American Culture Club had a 3 Kings display to represent the Hispanic tradition on January 6. The tradition has children filling a box with grass and water to feed the animals in the manager and placing it under their parents' bed to wake up to gifts in the box's place on the morning of the sixth.

It might've been cold, but the hot cocoa, food and a lively crowd kept this Winterfest in true holiday spirit! You can see all the excitement here!